The Cedar Lee Theatre is opening four new arthouse movies this weekend. Here are our reviews.

Bright Star “A thing of beauty is a joy for ever,” John Keats wrote in his famous poem “Endymion.” But beauty alone isn’t enough to sustain this historical romance written and directed by Jane Campion (The Piano), based on the last years of the short life of Romantic poet Keats (1795-1821). It is visually ravishing, each frame a more breathtaking painting than the last. Textually, though, it’s less compelling. Campion focuses on the affair between the gifted, destitute 23-year-old Keats (Ben Whishaw) and flirtatious 18-year-old fashion student Fanny Brawne (Abbie Cornish), a passionate love that inspired and sustained Keats until tuberculosis claimed him at 25. Campion says she was inspired by Andrew Motion’s Keats biography, although Motion’s book reinterpreted the poet as vigorously intellectual and politically engaged, whereas Campion adheres to the popular notion of Keats as a fragile dreamer. The characters as written, except for Paul Schneider as Keats’ irascible friend and protector Charles Brown, are rather vapid, and the content of the couple’s compulsive attraction is not really evident. Dramatizing the writing life is always challenging, perhaps more so with poetry: The reciting of verse, no matter how glorious, rarely makes for memorable cinema. ** 1/2 (Pamela Zoslov)

Dead Snow A group of medical students head to a remote cabin for what they think will be a fun week of snowmobile riding and frolicking in the snow. You don’t have to be a rocket scientist to know things aren’t exactly going to go as planned, especially when an old man shows up to warn them that the area has a history of violence. As predictable as Dead Snow might be, it’s also got a good twist: The zombies that come after these college kids are wearing swastikas (take that, Quentin Tarantino!). Yes, they’re Nazis, returned from the dead to decapitate and mutilate everyone that gets in their way. The bloodbath that ensues is campy good fun, especially since director Tommy Wirkola doesn’t rely on CGI graphics but instead uses cheap props and bucket loads of fake blood. *** (Jeff Niesel) 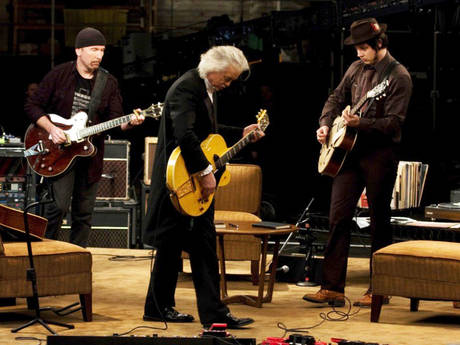 It Might Get Loud Director Davis Guggenheim set up a summit between U2’s the Edge, the White Stripes/Raconteurs’ Jack White and Led Zeppelin’s Jimmy Page, and then let the cameras role, hoping to capture whatever magic might result. While the three couldn’t be more different when it comes to their individual styles, they do find they have much in common in thinking of the guitar as a way of expressing their inner emotions. And all had humble backgrounds: Page found his first guitar as a child when his parents moved into a small apartment; White purchased a Montgomery Ward model that he modified; and the Edge found a cheap Gibson Explorer that was within his modest budget. Guggenheim delves into their backgrounds (everyone but the mercurial White contributed childhood photos) and visits old rehearsal spaces. All three players jam on each other’s songs, delivering pretty cool renditions of U2’s “I Will Follow,” the White Stripes’ “Dead Leaves and Dirty Ground” and Zeppelin’s “In My Time of Dying.” Guitar geeks will love the film; everyone else might find it a bit pretentious. *** (Niesel)

The September Issue As Vogue magazine editor for 20 years, Anna Wintour believes that most of the public doesn’t understand and is frightened of fashion. And many members of the public believe that the people in the fashion industry are frightened of her. R.J. Cutler’s documentary doesn’t dispel or confirm that idea. Instead, it follows the process of putting together the largest issue in Vogue’s history — September 2007. In the nine months he follows her and her staff, he gets closer to Wintour than anyone thought possible. Cinéma-vérité veteran Cutler and his camera step into the action at the magazine’s headquarters during meetings and into private offices during tense decisions. When Grace Coddington, Vogue’s creative director, stands by her convictions, it’s with a sense of artistry, and she’s right too: Her work is flawless. Wintour may cut the number of pages devoted to Coddington’s lush tableaus featuring 1920s-inspired narratives, but she knows Coddington will watch the progress on the wall mapping out every page in the magazine. They’ve been working together for two decades, and although it’s Wintour’s magazine — and her movie — the contrast with frazzled, emotional Coddington makes you appreciate more how she works. *** (Wendy Ward)