The Cinematheque is showing several great movies this weekend. Here are capsule reviews of just a few of them.

Big Man Japan (Japan, 2007) A bit of a slacker who lives in a small, messy apartment with a stray cat he doesn’t call his own, Daisato (director Hitoshi Matsumoto) carries an umbrella with him, even if it’s not threatening to rain. He rides around town on a small, beaten-up motorcycle. Yet Daisato is no everyday dude. When electrocuted, he transforms into Big Man Japan, a superhero who can fight off monsters. But there’s a problem. Big Man Japan is a superhero at a time when superheroes have gone out of vogue. His TV ratings are dismal, and he’s forced to accept sponsorships and perform publicity stunts to try to win over the disillusioned public. While the straightforward, documentary-style portions of Matsumoto’s film are funnier than the outlandish scenes in which Big Man Japan takes on his super-sized enemies, Big Man Japan is still a hoot. Though its low-budget battle scenes certainly won’t be confused with those in Transformers, the lack of computer-generated effects is actually refreshing. At 7 p.m. Thursday, July 16, and at 8:55 p.m. Friday, July 17. *** (Jeff Niesel)

Fados (Portugal/Spain, 2007) In Fados, eminent Spanish filmmaker Carlos Saura pays non-narrative tribute to the distinctly Portuguese musical tradition of balladeering. As with Saura’s earlier Flamenco, this is no PBS documentary, but rather a total-immersion experience in the art, with a series of fado song-and-dance numbers, performed on a simple yet spectacular stage festooned with vividly colored scrims and screens with apt projected images. Fadistas of all ages perform with some of the departed greats represented in archival clips For non-Portuguese viewers who mainly associate Maltese crosses with Snoopy fighting the Red Baron, Fados can be a cryptic but also a passionate, sensual and exhilarating experience, with the climactic “Casa di Fados” sequence a standout, as a mockup café of vocalists each take their turn in a sort of melodious dialogue. As with the blues, fado is adaptable indeed, and one is struck by the Pete Seeger-like tone of a fado political-protest song and an interesting attempt to blend fado and hip-hop in tribute to a street poet. At 7 p.m. Friday, July 17, and 9:20 p.m. Saturday, July 18. *** (Charles Cassady Jr.) 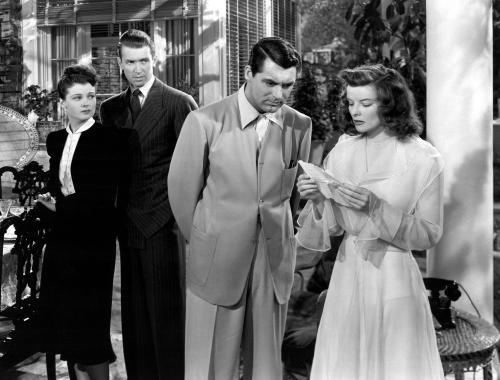 The Philadelphia Story (US, 1940) Katharine Hepburn, Cary Grant and Jimmy Stewart star in George Cukor’s romantic-comedy classic about a love triangle between divorced heiress Tracy Lord about to be married a second time, her ex-husband Grant a reformed alcoholic who won’t let her go that easily, and Stewart as a failed-novelist-turned tabloid reporter, trying to cover the elite event. They form a triangle of suitors (with another side, if you count Ms. Lords’ clueless fiancé) that leaves you on the edge of your seat about which of the best men will win. Watch this in its black-and-white glory and see one of the few instances when the overused adjective “sparkling” really does apply to mainstream film. Remade as the unmemorable musicalization High Society, with Grace Kelly, Frank Sinatra and Bing Crosby just not capturing the magic of the original (and those names were no slouches). At 7:05 p.m. Saturday, July 18, and 2:50 p.m. Sunday, July 19. **** (Cassady)

Treeless Mountain (US/South Korea, 2008) Shot in her native South Korea, writer-director So Yong Kim’s follow-up to 2007’s acclaimed In Between Days tells the touching, semi-autobiographical tale of two young sisters who get shuttled from relative to relative when their mother goes off in search of her absentee husband. More classical in style (think Ozu or Bresson) than Kim’s slightly punkish debut effort, the film has an unhurried, even contemplative rhythm that de-emphasizes melodrama in favor of naturalism and restraint. Kim also draws terrifically naturalistic performances out of her pint-sized stars (6-year-old Hee-yeon Kim and 4-year-old Song-hee Kim) that are practically Truffaut- or Spielberg-worthy. At 5:15 p.m. Saturday, July 18, and 1 p.m. Sunday, July 19. *** (Milan Paurich)