The Cleveland Institute of Art Cinematheque is showing several great movies this weekend. Here are reviews of two of them.

The Pleasure of Being Robbed (U.S., 2008) Twentysomething New Yorker Eleonore (cowriter Eleonore Hendricks) hopscotches around Manhattan stealing grapes, kittens, even a Volvo, seemingly for the sheer fun of getting away with it. Is she a klepto? Some kind of criminally inclined performance artist? Twenty-five-year-old first-time director Josh Safdie never gets around to telling us what makes Eleonore tick — since his movie only runs 70 minutes, perhaps he ran out of time — which is the central flaw of this mildly intriguing DIY indie. There are pleasures to be gleaned here (Hendricks is a screen natural, and Safdie evinces a neatly understated sense of deadpan humor), but like the film itself, they’re mostly of the small-change variety. As a calling card for director-for-hire gigs on network and cable sitcoms like The Office or Flight of the Conchords, it does its job in reasonably expedient fashion. At 8:25 p.m. Thursday, Aug. 20, and 8 p.m. Friday, Aug. 21. ** 1/2 (Milan Paurich) 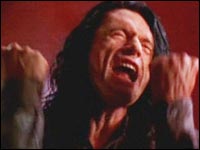 The Room (US, 2003) Among film hipsters on the West Coast, cult notoriety has been conferred upon writer-director-producer-star-mogul Tommy Wiseau’s tragic psychodrama. Wiseau, who kinda seems (in more ways than one) like Fabio crossed with Ed Wood, plays the lead role (no surprise there) of Johnny, a nice-guy San Francisco banking exec whose idyllic life starts to fall apart a month before his planned nuptials. Fiancée Lisa secretly doesn’t love him anymore (we are told this about four or five times) and is carrying on an affair with Mark, Johnny’s “best friend” (we are told this about 400-500 times). With English-as-a-second-language dialogue, characters who awkwardly entrez and exeunt, laughable love interludes and from-hunger acting, the world may now be laughing at Mr. Wiseau, not with him. But grant The Room this much: It's not an amateur Tarantino/Lucas/Spielberg/Romero genre clone, like so many turkeys, but bravely blazes its own way, à la Wood’s singular Glen or Glenda. At 9:50 p.m. Saturday, Aug. 22. ** 1/2 (Charles Cassady Jr.)