The Cleveland Institute of Art Cinematheque is showing several great movies this weekend. Here are our reviews. 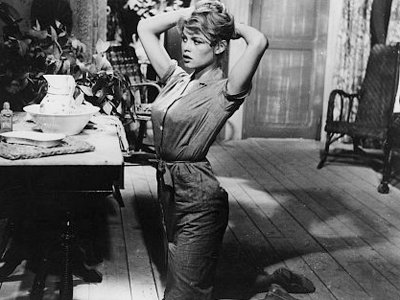 … And God Created Woman (France/Italy, 1956) When Roger Vadim’s sinful drama first premiered in the U.S., it was banned in Philadelphia and denounced by clergy, conservative politicians and even film critics. In truth, star Brigitte Bardot shows a soupçon more skin than a Jennifer Jones or Carroll Baker would have in an equivalent movie. Setting is sunny St. Tropez (practically a character in itself), where Juliette (Bardot) is a naturally sensuous, curvy nymph from the lower classes, burdened with a sluttish reputation. A suitor wants to marry her and spare her the sneers and exploitation of lustful men. The dynasty disapproves, naturally. The big secret: Worldly older brother Eric is the same cad who slept with Juliette in the first place. Ultimate, the unabashedly sexist question is whether Michel will get the nerve to “tame” Juliette and prove his manhood in bedroom and boardroom alike. Give Vadim credit for helping broaden the U.S. market for “hot” European productions — including ones by Fellini and Bergman — even if they were peddled as softcore sleaze for the grindhouse element. At 5:30 p.m. Saturday, Sept. 5, and 4:30 p.m. Sunday, Sept. 6. ** 1/2 (Charles Cassady Jr.)

Anvil! The Story of Anvil (U.S., 2008) It’s the summer of 1984, and a heavy-metal tour featuring the Scorpions, Whitesnake, Bon Jovi and Anvil has hit Japan. All the bands would go on to have multi-platinum success. Except for Anvil. After footage from that tour, along with testimonials from Guns N’ Roses guitarist Slash, Motorhead singer Lemmy and Metallica drummer Lars Ulrich, Sacha Gervasi’s Anvil! The Story of Anvil commences with scenes that show what has become of the ballyhooed Canadian rockers. Drummer Robb Reiner has a job in construction, and singer-guitarist Steve “Lips” Kudlow works for a catering company. “For all this horrible shit I have to go through, I have Anvil that gives me my happiness,” says Kudlow. “It could never be worse than it already is.” The guys still get together to play and perform at a crappy sports bar one night to celebrate Lips’ 50th birthday before leaving for a European tour. When they get back to Canada, no label shows any interest in signing them after they spend borrowed money to make a new album. So the guys decide to self-release the resulting This Is Thirteen. While the movie ends with the album’s unnoticed release, it wasn’t all for naught. Since the film came out, AC/DC picked the guys to open a few choice stadium shows. And the self-released album has since found a home on VH-1 Classic, which will reissue it this month. After seeing the film, you’ll understand why the guys have finally gotten a break. A loveable loser whose passion far outweighs his intelligence, Ludlow makes a compelling anti-hero with whom you can’t help but sympathize. At 9:15 p.m. Saturday, Sept. 5 and at 7 p.m. Sunday, Sept. 6. *** (Jeff Niesel)