The Cleveland Institute of Art Cinematheque is showing several great movies this weekend. Here are reviews of just a few of them.

Aliens (U.S., 1986) The hit sequel to Alien is bigger, faster and more amped up than the moody, cramped original. If it errs, it does so when director James Cameron insists on squeezing out every last cliffhanger and goes over the line with the manipulation, putting a screaming little orphan girl in hideous peril every time the opportunity arises and conniving to make sure that opportunity always does. At a time when gun-fetish actioners set the pace for the 1980s, Aliens won fans on both sides of the aisle, from the action freaks to the horror/sci-fi geeks who read profound feminist meaning into Sigourney Weaver as a butt-kicking female action heroine (back before that become tiresome). At 8:10 p.m. Thursday, Sept. 24. *** (Charles Cassady Jr.) 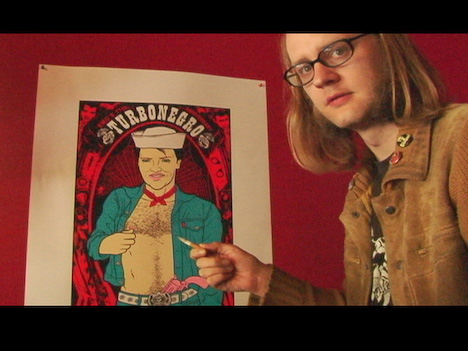 Died Young, Stayed Pretty (Canada, 2009) In visiting 30 different states and shooting 250 hours of footage, Iranian-born Canadian photographer-turned-director Eileen Yaghoobian tracked down everyone from iconic poster maker Frank Kozik to Lightning Bolt’s Brian Chippendale (Cleveland’s Derek Hess gets a shout-out in the movie) for her terrific documentary Died Young, Stayed Pretty. The movie provides a Slacker-type overview of a scene still burgeoning despite the downturn in the music industry. But it's clear after watching this film, that these guys aren't making rock posters for the money (though some do have graphic design jobs that provide them with the means to live). Rather, a love of art (and indie rock) drives most of the artists interviewed in this film. Yaghoobian will answer questions after both screenings. At 7:30 p.m. Friday, Sept. 24 and at 9:40 p.m. Saturday, Sept. 26. *** (Jeff Niesel)

Not Quite Hollywood: The Wild, Untold Story of Ozploitation! (Australia/US, 2008) It’s fitting that Quentin Tarantino is the first person onscreen to talk about Australian drive-in movies in Not Quite Hollywood: The Wild, Untold Story of Ozploitation! The Inglourious Basterds director has spent his entire career paying homage to the type of blood-soaked and boob-stacked films sampled here. After a brief scene in which a bunch of social critics and filmmakers attempt to link the growth of exploitation movies in the early ’70s to homegrown hippie culture, Not Quite Hollywood cuts to one of the country’s early genre pics, in which a drunken Aussie snaps a kangaroo’s neck. That pretty much represents the films’ reputations among movie critics and highfalutin directors (though they were mega-popular with the people they satirized, much to the filmmakers’ chagrin). This fun and enlightening documentary surveys a whole history that cult-movie fans may be aware of, but mainstream moviegoers probably never even knew existed. At 7:35 p.m. Saturday, Sept. 26 and at 8:35 p.m. Sunday, Sept. 27. *** (Michael Gallucci)