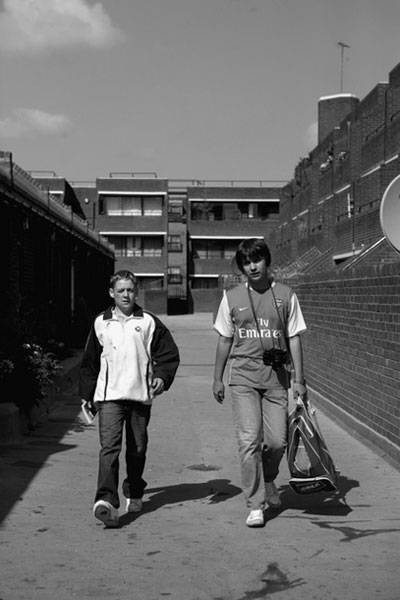 Somers Town (Britain, 2008) The working-class London of Somers Town isn’t always a pretty place, but it is a loving and forgiving one. And in Shane Meadows’ concise black-and-white film, the residents work, drink and bitch about their losing football team. Then they go to sleep, get up and do it all over again. Teenage Tomo (Thomas Turgoose), on his own and spending his first night in London, gets jumped and beaten up by three boys, who take his bag of clothes and his money. The next day in a diner, he meets Marek (Piotr Jagiello), a young Polish immigrant who lives with his hard-working, hard-drinking and devoted dad. The boys strike up a friendship, initially over budding photographer Marek’s pictures of beautiful French waitress Maria. Marek hides the homeless Tomo in his bedroom. They got along great, despite their physical differences: Marek is tall with shaggy brown hair; Tomo is short and wears his blond hair in a buzz cut. They have one thing in common: They’ve both fallen for Maria. Not much happens in Somers Town, the locale or movie. But director Meadows has real sympathy for his characters. His previous film, 2006’s terrific This Is England, was a blistering portrait of young British skinheads. (Turgoose made his debut in the movie as a directionless boy who falls in with a gang of thugs.) Meadows keeps things more modest in the slice-of-life Somers Town, which is basically a coming-of-age story about two boys on the verge of manhood. At 7:15 p.m. Friday, Oct. 16, 5:30 p.m. Saturday, Oct. 17, and 8:10 p.m. Sunday, Oct. 18. *** (Michael Gallucci)

A Woman in Berlin (Germany/Poland, 2008) In the waning days of World War II, a battalion of Russian soldiers occupy Berlin while waiting out Hitler’s surrender; they systematically — and sometimes brutally — rape most of the female population. Based on an anonymously penned memoir by one of the Soviet rape victims, Max Färberböck’s (Aimee and Jaguar) grim and gutsy film dramatizes this provocative, little-known slice of history with a minimum of sensationalism and more sensitivity than expected. As the title character — who’s never identified by name — Nina Hoss delivers a superb, terrifically nuanced performance. An iron-willed pragmatist determined to survive at all costs, she embarks upon an adulterous affair with a Russian major (Yevgeni Sidikhin) who becomes her de facto “protector.” Färberböck somehow manages to pull off the curious feat of actually getting us to sympathize with unrepentant Nazis. That’s quite an achievement, and so is his fine, if slightly overlong film. At 7 p.m. Saturday, Oct. 17, and 3:45 p.m. Sunday, Oct. 18. *** (Milan Paurich)

Zelig (US, 1983) Woody Allen used a full mockumentary format for this farce which, while thoroughly brilliant, is a little like one of his New Yorker pieces stretched to feature length — good call on the 80-minute running time. The documentary pretends to “rediscover” Leonard Zelig, a Depression-era American human curiosity. Zelig (Allen, in beautifully finessed black-and-white vintage-style clips and stills) is described as a man so neurotically inclined to conform and become accepted by others that he physically and emotionally becomes pretty much any ethnic/political/social type with whom he’s faced. During the 1930s, Zelig’s ability is noticed by medical science, and Zelig becomes a media sensation as a “human chameleon,” hobnobbing with the famous, and even spawning dance crazes and Cole Porter lyrics in his name. Not coincidentally, Zelig is Jewish, a bit of commentary there courtesy of the filmmaker, on the culture’s desperate need for assimilation as protection; interviewees like Susan Sontag, Saul Bellow and Bruno Bettelheim go along with the great gag. At 9:35 p.m. Saturday, Oct. 17, and 6:30 p.m. Sunday, Oct. 18. *** (Charles Cassady Jr.)