Richard Gere Turns 'Norman: The Moderate Rise and Tragic Fall of a New York Fixer' Into a Compelling Drama 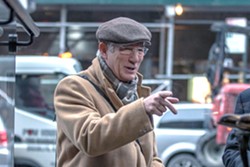 While he’s had a number of good roles over the course of a career that dates back to the '70s, Richard Gere is in especially in good form as Norman Oppenheimer, the lead in Norman: The Moderate Rise and Tragic Fall of a New York Fixer, an arthouse flick that opens on Friday areawide.

A complex figure that one of the film’s characters describes as a “warm Jew,” Norman seeks to connect people and seems to have good intentions, though that becomes suspect when his relationship with Micha Eshel (Lior Ashkenazi), a young politician who would become the Prime Minister of Israel, comes under scrutiny.

Norman befriends Micha one day at a conference. He follows the man to clothing store where he cordially introduces himself and then offers to buy him an extremely expensive pair of shoes. The two bond, even though Micha doesn’t entirely know what Norman’s motives are and, at the urging of his advisor, backs out of Norman’s invitation to join him at a dinner at the house of one of New York’s most prominent businessmen (Josh Charles).

Norman meets Micha again after he becomes Israel’s Prime Minister. Micha remembers him and tells him he’d like him to be an advisor of sorts. It’s the moment for which Norman has been waiting. Unfortunately, he proceeds to relentlessly pester Micha, and the people in Micha’s inner circle do everything they can to insulate their man from Norman.

Norman’s worlds collide, however, when his friends in the Jewish community enlist him to save their church, and he promises the rabbi (Steve Buscemi) that he’ll find him the millions of dollars he needs. Finding the dough involves working with his nephew (Michael Sheen), a legitimate businessman who regularly tries to keep Norman out of trouble. Tensions rise as Norman gets deeper and deeper into the mix.

Even by the film’s tragic end, it’s not clear whether we should sympathize with Norman. When his relationship with Micha comes under scrutiny, the investigator tells him that she realized no one really knows him. We feel like we know him but we really don't. It's what makes the film (and Gere's nuanced performance) so intriguing.