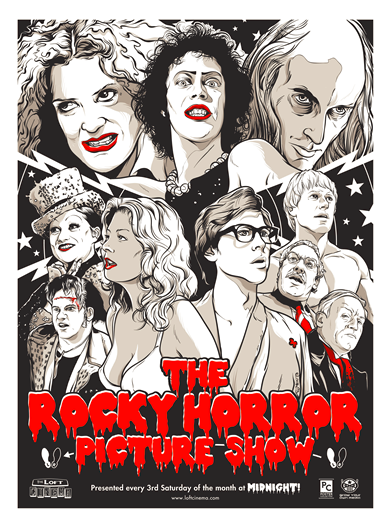 Photo Courtesy of Matthew Chojnacki
The Rocky Horror Picture Show by Joshua Budich
The Rocky Horror Picture Show began its multi-decade run at the Cedar Lee in September, 1988, and holds the distinction of being Cleveland's longest-running theatrical feature film ever. After a 20-month hiatus due to the pandemic, Cleveland Cinemas has announced that they will re-launch the monthly screening at 9:30 p.m. on Nov. 6 at the Cedar Lee. Thereafter, Rocky Horror will play at 9:30 p.m. on the first Saturday of every month.

For those unfamiliar, the 1975 rock musical starring Tim Curry, Susan Sarandon, Barry Bostwick and Meat Loaf is an interactive midnight movie classic. Campy as all get-out.

"A screening of Rocky Horror in a theatre is more than just watching a movie in a darkened auditorium," reads the event announcement, "it’s an interactive theatrical and social experience unlike any other. Audience participation is welcome and encouraged, there is an entire litany of callbacks regulars shout at the screen and each other during a screening and some of the most dedicated fans show up in costume."

In Cleveland, the screenings feature Simply His Servants, a live Rocky Horror cast that re-enacts the film in front of the screen and host the festivities inside the auditorium.

While Simply His Servants will be back on Nov. 6, the experience will be slightly modified from pre-Covid days. According to Cleveland Cinemas, masks will be required inside the venue at all times (when not actively eating or drinking), and no objects may be thrown at the screen: "Management is asking patrons to leave all props at home," reads the announcement.

Cleveland Cinemas also recently announced a spinoff of the Capitol Theatre's popular 12 Hours of Terror Movie Marathon, a winter-themed horror marathon they're calling Season's Bleedings. But the return of Rocky Horror at the Cedar Lee is an even more potent symbol that the local movie theatre chain is trying to get its feet back under it and re-launching the programming that made it so beloved. The midnight movie tradition will live on in Cleveland, just at 9:30.