Everything -- and everyone -- is less than zero, living by Avary's Rules.

Send a News Tip
The Rules of Attraction 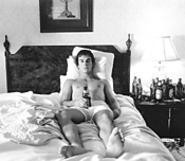 Roger Avary's screenplay for The Rules of Attraction is a remarkable work of literature: the disassembly and reconstruction of an impenetrable book by Bret Easton Ellis; a simplification and amplification of the 1987 novel's attack on the bored, beautiful, and wealthy; a streamlined and mainlined version of a story originally told by some two dozen characters -- all narrating in the whiny-bitchy me-me-me first person. Where the novel ran on like a coke-binge bloody nose, the script has structure, makes sense, and gives the audience room to breathe and think -- and maybe even feel something for these vapid characters, as they run amok on a northeastern college campus. The script is less dizzying than the novel, but it's no less a thrill ride when characters speak and move in reverse, as actions rewind to offer different perspectives on events already witnessed.

The novel felt like little more than a lazy, hazy sequel to Ellis's Less Than Zero, itself the source material for one of the most patronizing just-say-no films made in the 1980s. Avary's script feels more like a sequel to Ellis's 1991 novel American Psycho (even though the chronology of the novels is the other way around), starring not the psycho killer Patrick Bateman, but his spoiled little brother Sean, who displays his cruelty without use of blowtorch and hacksaw. Sean's as despicable as his older bro, but he's a different breed of killer. "I pretend to be a vampire," Sean says in voice-over, "and I don't really need to pretend, because it's who I am -- an emotional vampire."

Sean's actions will, in fact, lead to the death of someone who loves him deeply, but he's too self-absorbed to notice his impact on others; he's dead in the eyes and in the heart -- a cipher, truly less than zero. James Van Der Beek, TV's Dawson, brings remarkable depth to Sean's shallowness; his is a razor-sharp smirk, which he uses to get into girls' (and, when need be, boys') underwear -- when he's stoned enough to get it up. Liberated from prime time's shackles, Van Der Beek has a blast playing bad. It's astonishing that so emotionally moribund a character is the most energizing one in the entire film; everyone else is just a pawn shuffled around on Avary's chessboard, someone to screw or do the screwing between Sean's scenes.

Of course, they're all more than way screwed up: Paul Denton (Ian Somerhalder), the bi pretty boy with a thing for Sean; Lauren Hyde (Shannyn Sossamon), Paul's ex and a virgin, who holds out for her dream lover, Victor, by staring at medical textbooks filled with close-ups of VD-riddled genitalia; Lara Holleran (7th Heaven's Jessica Biel), Lauren's horny roomie, who refuses to believe abstinence is 100 percent safe, since "I don't major in math"; Victor Johnson (Kip Pardue), who did Europe, literally; and a handful of minor players who spend the entirety of the film getting drunk, throwing up, shooting up, and falling down.

Avary's having fun here; that the Pulp Fiction co-writer works himself into a noble froth over so vacuous and unlikable an assemblage is almost admirable. He, like Mary Harron and Guinevere Turner before him in American Psycho, wants to elevate and redeem Ellis's books -- to make them resonate today, to keep them from becoming mere echoes of the moment in which they were written (Ellis's books were little more than reflections seen in whatever mirror his characters were cutting coke on). And Avary almost succeeds; his passion almost pushes the mundane into the meaningful -- you can feel how much he cares about his characters, and he almost gets you to do the same.

By stripping away Ellis's blah-blah-blah, Avary cuts to the quick of the material: Sean, Lauren, and Paul just want to connect with someone, feel something, believe in anything; they're hollowed out, but not for lack of looking for that thing that will fill them in, give them depth and meaning and purpose. Somerhalder, especially, has the face of a kid, yearning for connection and collapsing when he realizes it ain't ever gonna happen; he's a pretty boy who realizes that his looks will get him nothing and land him nowhere, and his Paul has a sadness the book barely hints at. Sossamon, too, gives Lauren a warmth the book never seemed to acknowledge; by making her a victim at the film's beginning -- she's shown in a rather explicit rape scene played, in part, for grim and grimy laughs -- Avary puts us on her side. We want her to end up with Victor, and we're saddened and sickened in knowing that she never can.

But for all its kinetic energy, for all its camera tricks, for all its dark humor, there's still something a bit off about these Rules, and it's not really Avary's fault. It's Ellis's and always has been, because deep down he's a moralist -- a guy who likes writing about decadence, but who, at the end of the day, probably shuffles off to sleep with a glass of warm milk. It's a dispiriting trick, getting us to revel in the muck only to offer the same old stale platitudes and warnings; this isn't a movie, just one more cautionary tale your mom would approve of. Its message: Stay in school, don't do drugs, treat your parents with respect. Ugh.