Romance gets retarded in Pumpkin. 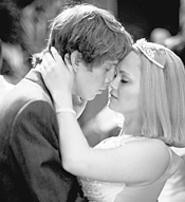 Christina Ricci falls for a retarded beau in Pumpkin.
If there's any truth to reincarnation, the spirit of Napoleon may walk among us today. It's not unreasonable to conjecture that he has taken up residence in Bill Gates or Joel Silver, but -- perhaps more likely -- the little conqueror with the big hat has fragmented and landed in the bodies of countless sorority sisters. At least, this is how the wickedly funny Pumpkin makes it seem, with the snotty university Greek system representing a seething territory of divide-and-conquer campaigns.

Our focal point -- and subtly tyrannical empress -- is Carolyn (Christina Ricci), a hermetically sealed product of SoCal country club spoilage who couldn't find her reality with both hands. According to her sorority president, Julie (Marisa Coughlan), the bottle-blond senior is the "most enthusiastic sister" of her largely brunette Alpha Omega Pi house, which struggles against the tall, blond "mastodons" of the Tri-Omegas directly across the Row. With her co-dependent Ken doll, Kent (Sam Ball), and soullessly chummy roomie, Jeanine (Dominique Swain), the glittering Carolyn is poised to lead her house to ultimate victory in the S.O.Y., or Sorority of the Year competition.

Not long ago, this sort of setup would have led to breasts slapping around all over the place -- H.O.T.S., anybody? -- but under the auspices of Ricci as co-producer and Francis Ford Coppola as a co-exec, writer-director Adam Larson Broder and co-director Tony Abrams have chosen to go revisionist. Way revisionist. While the Tri-Os are giggling and jiggling for "safe sex in public schools," the AOs choose as their charity -- with some initial dissent from Carolyn and Jeanine-- the Challenged Games. This quickly translates to a small caravan of short buses delivering a load of "special" athletes to the posh campus, that the sisters may attend them in training. (Un)naturally, this cockeyed cotillion becomes the breeding ground for alarming geek love.

The crux of Pumpkin -- and of Carolyn's extremely gradual acceptance of life beyond princesshood -- is its eponymous, retarded hero (Hank Harris). While Jeanine flees in horror from her hopeful charge (Michael Bacall), Carolyn attempts to cope and quickly finds herself terrified, fascinated, and stricken with wrenching denial. Pumpkin is all affection with no affectation, and she reticently swoons for his cuddly company -- or, perhaps without realizing it, for his fatherless wistfulness or Beverly Hills privilege. Whatever the case, her perfect life rapidly falls to ruin, with Broder and Abrams adroitly framing every tacky nuance, creating a worthy successor to the dark, dry dementia of Heathers.

We've had plenty of entries in the glamorous Cinéma du Rétard and its subgroups, but Pumpkin really is special. It exploits retardation neither for laughs nor tears; rather, the device is just an easy gloss on the immortal tale of the apparent loser and the covetable princess. It's worth the haul to watch Ricci's great dictator confused, humbled, wooed, and confused again by her challenged and challenging squeeze. As with the fall of any tyrant, we're left to wonder if her grand designs were obliterated for the betterment of all.