How the story of a high school basketball team ended up much more. 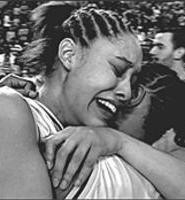 A brief documentary morphs into a vivid chronicle as the girls' lives unfold.
Originally, Ward Serrill set out to make a documentary -- and a short one at that -- about Bill Resler, an avuncular tax professor at the University of Washington, who thought he knew enough about basketball to coach the girls' team at Roosevelt High School in Seattle. Never mind that he had no previous experience at such a job, other than teaching his three daughters the game long ago; Resler was just brash enough to believe it was the right part-time job -- especially since his idea of offense amounted to little more than calling schoolyard plays and praying that the rock went in the hole. Serrill, a maker of do-gooder public-service announcements featuring celeb voiceovers, considered Resler engaging enough to make him art-house famous -- till he met Darnellia Russell, that is, who wound up the star of the team and the star of a movie bound up not just in the X's and O's of winning and losing, but the politics of race, gender, and class.

If all that sounds highfalutin, fear not; The Heart of the Game, which debuted at the Toronto International Film Festival to thunderous applause and a deal with Miramax, is a sweet, touching, engaging journey with the Roosevelt Roughriders, a team coached by a novice who encourages teenage girls to snarl like wolves and devour like lions. Resler -- a kindly man with a disturbing, funny tendency to command his team to "Draw blood! Draw blood!" -- is still at the heart of the movie, only now he shares it with Russell, a junior-high phenom who left her friends behind to play ball at a rival crosstown school populated by white girls.

The movie begins midseason, several years back; there's no footage of early games, as Serrill was late to the game (literally) and missed the blowouts that suggested an also-ran team was making a quick dash toward perennial contention. Some of the girls interviewed aren't even identified; they're bit players whose parts turned even smaller, once Russell walked into the gym and seized the ball and the movie. At last, she comes to dominate the proceedings entirely, moving from the sidelines to center court during several seasons' worth of ups and downs that threaten to derail a potential WNBA career. Amazingly, Russell wanted nothing to do with Serrill when he first approached her in the gym, yet she winds up talking to the camera as though it were her confessor; perhaps its presence merely proved cathartic, as her life slowly began to implode and her hoop dreams fell into nightmare pieces.

To detail precisely what happens to Russell during her high school career would give away the startling, troubling, and even thrilling second half of the movie, which unfolds with unexpected suspense that has nothing at all to do with what happens on the court. There are small things that loom large: the strained friendship with a childhood chum, who plays for the school Russell should have attended; the rivalry with a middle-class white teammate that threatens to upend a winning season; the issue of being one of the only black girls on the team. But something much bigger occurs later, and suffice it to say that Russell winds up having to defend not only her right to play ball, but her right to do so as a woman governed by men who embrace double standards as they would lost children. The film, which elicits generous chuckles at surprising moments, threatens to unravel as a tragedy during its final act; how awful it would be, should Russell's teenage actions and subsequent decisions, made with surprising wisdom and vitalizing grit, haunt her.

But there are other stars too, chief among them Devon Helms, the team leader before Russell gets there. Early in the film, she's forced to deal with her own crisis of faith -- and because Serrill's with both her and this story for years, he chronicles not only the downward spiral involving a basketball instructor outside the school, but also the moments of redemption that follow much later.

There's no getting around it: The Heart of the Game, narrated by Ludacris with a straight-faced sincerity that approaches but never becomes cloying, has its bleak moments, but aspires to inspire and uplift; you revel in the moment during which the girls discuss their reluctance to touch each other on the court and their eventual love for the pushing and shoving of hardwood war. One can only imagine the difficulty Serrill had in assembling a film that evolved with each day; he never could have anticipated the arrival across town of coach Joyce Walker, with her Harlem Globetrotters fame and weighty expectations, or the annual drives to the state title that drain the viewer as a high begets a low and vice versa. That he crafted so eloquent and moving a film from so many moving parts is a profound testimony not only to his craftsmanship, but also to the girls -- no, the women -- at the heart of The Heart of the Game.