Smallfoot, with LeBron in Supporting Role, Flirts with Subversion 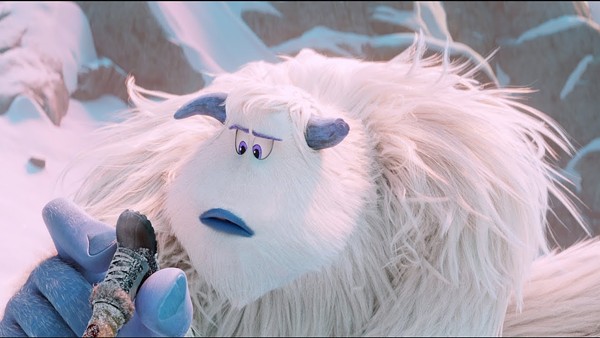 Channing Tatum voices Migo in Smallfoot
LeBron James has precious few lines in the new Warner Bros. computer-animated film Smallfoot, but he makes the most of them. He voices a lumbering purple Yeti named Gwangi who’s part of a radical sect devoted to evidence-based inquiry about the world. “Evidence-based inquiry” is anathema to the mountaintop Yeti community where he lives, and Gwangi is viewed as the craziest among his pals. He’s a harebrained conspiracy theorist whose questions, because they challenge the established order, are ridiculed on a daily basis.

Migo (Channing Tatum) is the film’s hero. He proclaims in the opening song — Smallfoot is a musical – that he is proud to be a cog in his community’s wheel, overjoyed to learn and perform his assigned task. (It’s the Smallfoot version of The Lego Movie’s “Everything is Awesome.”) He can’t wait for his father to retire so that he might inherit the family job: sling-shotting himself at full speed across their mountain valley and striking a gong with his helmeted head every morning. The gong, Migo believes, makes the sun rise.

But when Migo overshoots the gong on a practice run and finds himself beyond the valley, he encounters a human pilot in a downed plane. He rushes back to his village to alert the others. The Smallfoot exists! This revelation is met with horror and disbelief by the community, because the existence of humans has been outlawed. Laws in the Yeti community are etched in stone and weaved into a cloak that the village’s elder and chief, the Stonekeeper (Common) wears. When Migo is given the chance to renounce his discovery, he doesn’t understand why he should have to. He saw it. How can there be a law denying the existence of something he just saw?

Raised to tell the truth, Migo won’t pretend the Smallfoot doesn’t exist and he is banished. So with the help of Gwangi and the radical sect’s preternaturally curious leader Meechie (Zendaya), Migo sets out to prove the existence of humans so that he might return to his village. But in the process, he stumbles upon a grand conspiracy, one that should be familiar to oppressed people everywhere – those in power create the rules; they engineer reality itself – and his enlightenment carries its own costs.

The flagship tune is meant to be the Zendaya paean to science class, “Wonderful Life” – a life that’s full of wonders, she sings, is a wonderful life – but my personal favorite was a remix and parody of Queen’s “Under Pressure” that the human character Percy (James Corden) sings in a Himalayan karaoke bar. He’s an outdoor TV host whose career has plummeted in the age of YouTube animal clips. And while Migo climbs down the mountain searching for a human, Percy plans to fake a Bigfoot encounter to resuscitate his career.

Despite flirting with subversive themes – a welcome departure for family entertainment! – Smallfoot ultimately returns to trite, feel-good territory. The songs and the animation are as polished as you’d expect from a major studio, though after last year’s Greatest Showman, (also starring Zendaya), all these numbers sound a tad undistinguished. The film opens Friday in wide release and rest assured that youngsters will enjoy the wacky voices and physical comedy.