Its heart is in the right place, but John Q. is too clumsy to make us care. 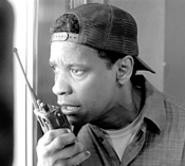 Denzel delivers, as usual, in a role that's overly simplistic.
Following his dazzling change-of-pace performance in Training Day, Denzel Washington returns to more familiar turf in another of his trademark roles as One of the Best Human Beings in the World in John Q. The opening scenes establish quickly (and a bit heavy-handedly) that John Q. Archibald is the finest possible incarnation of the American Everyman. He works hard at a Chicago steel plant, sings in church, and loves his wife, Denise (Kimberly Elise), and nine-year-old son, Mike (Daniel E. Smith). But times are tough, and thanks to the poor economy, his work hours have been cut back. Even with his wife taking a job, the Archibalds are having trouble paying their bills. John is willing to do anything to get a higher-paying gig to support his family.

Suddenly, this sad, familial, and altogether believable setup is blown to bits by tragedy, when little Mike collapses in the middle of a ballgame. It's discovered that he has a long-undiagnosed heart defect that will kill him within weeks, unless he can get a transplant. John, who has always opted for the maximum medical coverage, is confident his insurance will take care of it. His faith is quickly shattered: It turns out that his employer, for whom he has worked long and hard, has recently switched health plans, and that John, having been temporarily cut back to part-time, has been bumped from the PPO plan to less comprehensive HMO coverage. He's faithfully paid his premiums all these years, but, now that he needs it, his coverage has been reduced way beneath the level required for a heart transplant.

The brittle hospital administrator -- Anne Heche, playing another of her trademark Frosty Bitch on Wheels roles -- explains that the only other option is for John to raise a $75,000 deposit to cover a third of the expenses. Even after the sympathetic cardiac surgeon (James Woods) agrees to waive his fee and the Archibalds have sold off their every possession, and their friends and neighbors have chipped in every possible dime, they are still woefully short of the required amount.

In essence, screenwriter James Kearns and director Nick Cassavetes have stacked the deck to present as pure a case as possible: It makes no difference that John and his family have done everything right to achieve the American Dream; when push comes to shove, they are simply too poor for their son to be saved. (To drive the point home way too forcefully, John sees a wealthy, sixtyish transplant patient relishing the second lease on life that is being denied to his little boy.)

With Mike's vital signs dropping quickly, John's back pressed harder and harder to the wall, and no obvious way out, our hero comes up with an un-obvious solution: Gun in hand, he takes the cardiac surgeon and everyone in the emergency room hostage, demanding that Mike be placed on the heart-transplant waiting list, money be damned. Veteran hostage negotiator Frank Grimes (Robert Duvall) is dispatched to the scene, but soon finds his delicate control of the situation being compromised by the image-conscious chief of police (Ray Liotta), who wants John eliminated now.

John Q. clearly aspires to couch discussion of a crucial social issue -- the need for (and righteousness of) universal health care legislation -- in the garb of a palatable, mass-market thriller. It's a fine ambition, but one that the film, hampered by clunkiness on both fronts, only partly fulfills. The more commercial elements are often ham-fisted: The climactic cliffhanger sequence is both murkily executed and dependent on egregious coincidence. When emotion is called for, Cassavetes drags out every tear-jerking moment beyond the point of tolerability.

At the same time, to work in his points about predatory HMOs, government inaction, and public indifference to the crisis in health care, he occasionally has the film grind to a halt for flat debate about the issues. It's great to hear these concerns addressed in a major motion picture, and the level of discourse is higher than you're likely to hear on Fox News Channel; but it's hard not to wish that the filmmakers had found some way to better integrate the issues with the entertainment.

The film has its virtues, primarily among the performances. Washington is always worth watching, even in a role written with as few complexities as this one. (Admittedly, the title itself, with its clear Everyman implication, signals that our hero is as much a symbol as a human being.) Like Washington and Heche, Duvall and Liotta are essentially playing types with which they've become associated -- Duvall more or less reprising the role he played in the notorious Falling Down and Liotta doing his sleazebag shtick from Hannibal and numerous earlier films. As a consequence, the less familiar supporting actors leave a stronger impression. Although it's almost ghoulish to see director Ted Demme, who died of a heart attack only weeks ago, playing himself in one brief shot, in a film centering around heart surgery.

Because of its excesses, John Q. comes dangerously close to overstaying its welcome. Pushing toward the two-hour mark, it's a film that might have made its points more convincingly if its makers hadn't felt obliged to underline and spell out at length every one of those points.