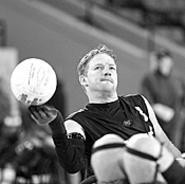 Team USA member Scott Hogsett calculates his next move.
"Hit me," says Mark Zupan -- begs, actually, like a kid clamoring for a new toy. "I'll hit you back." He means it too, and his ripped pecs, buzzed scalp, tattooed back and arms, and bushy gangster-goatee promise just as much menace. The dude's bad and doesn't need to say shit for you to take him at his word. Problem is, you might not take him seriously after all, because for the past 12 years, the 30-year-old former Division I college soccer player has been confined to a wheelchair, the result of a night of drinking and driving with a buddy that culminated in his being tossed into a ditch, where he remained for more than 13 hours, clinging to a branch swarming with red ants that dined on his hand. After a passing motorist discovered him, Zupan was told by docs that his neck was broken and that he'd never walk again, much less kick a soccer ball. Which isn't to say he would never kick someone's ass again.

For the past nine years, Zupan has played a sport few had even heard of till Murderball, a movie by co-directors Henry-Alex Rubin and Dana Adam Shapiro, rolled into the Sundance Film Festival in January and collected two awards. Murderball, or quadriplegic rugby, pits two teams of four players against each other on a basketball court, where, for 32 minutes, they try to see who can get a volleyball between two red cones the most often. It sounds benign enough, but it's perhaps the most violent, extreme sport this side of Thunderdome; even the specialized wheelchairs, with front bumpers used for ramming and wheels covered in protective metal, look cobbled from spare parts from the Mad Max junkyard. Zupan is the sport's and the movie's star, a warrior who plays a game that involves the tipping of chairs and flipping of men, all of whom have limited use of their limbs and some of whom are missing them altogether.

Yet one of the most remarkable things about Murderball, which is easily among the year's best movies, is how little of its time is filled with the playing of the game. Though it has an arc that bounces from the World Quad Rugby Championship in Sweden to the Paralympics in Athens, Greece, and pits archrivals Team USA against Team Canada, it's a sports documentary in which the victory is the thing, but not the only thing. Rubin and Shapiro aren't suckers for the final score; they don't shift into slow-mo for that last goal. Theirs is a doc about perception and reality, about how the tragic incident can lead to the heroic moment. It's rousing and inspirational, absolutely, but without the strain of a motivational speech; these men are accidental heroes at best, survivors who made the most of their lousy breaks and lived to transcend even their own expectations. Had they not been injured, perhaps they would have led dull, ordinary lives. Instead, they're more than they might have been, simply with less than most.

Zupan, you see, is not only a badass star of a brutal sport, but also a saver of lost souls -- a proselytizer to those who believe their wheelchairs are their prisons. Indeed, at the heart of the film is his friendship with and mentoring of Keith Cavill, introduced to us not long after a motocross accident landed him in a wheelchair, where he once stewed in depression and self-pity. But once Zupan lets the kid sit in his tricked-out chair, Cavill's born again: The kid who had given up wants onto the hardwood, where he can hit someone, just like his new hero.

There are two movies here: In one, Zupan and his teammates, who include Andy Cohn (injured in a car wreck) and Scott Hogsett (snapped spinal cord, suffered during a backyard brawl), fight to retain their No. 1 world ranking against Team Canada, coached by disgruntled former Team USA member Joe Soares. Soares, who had polio as a child, was a Team USA star himself till he was cut from the team, and he's motivated solely by revenge. He's as close as the movie comes to a villain: Not only do his former teammates view him as a traitor, but he's portrayed as a bully to his son, Robert, who wants only to read and play his music. Not even a heart attack, suffered during filming, can temper his fury; he's still out for Zupan and Team USA's blood. But Soares does soften toward his son, and he's not without his moment of redemption. It's among the many warm moments in a movie that flirts with mawkishness, but doesn't succumb to the easy out.

In the other half of Murderball, Zupan and his pals testify to how wonderful life at ass-level can be: They still screw, still get screwed up, and still screw around. (In one hysterical scene, a teammate whose limbs were devoured by a rare blood disease proves how easily he can fit into a cardboard box, in a sort of homage to Ocean's Eleven.) Their lives can be miserable -- the opening scene reveals how torturous the simple act of dressing can be for Zupan -- but wonderful too. "I've actually done more in a chair than I did able-bodied," Zupan tells a group of newly disabled men undergoing rehab. Hogsett's even more on the nose: "We're not going for a hug," he tells the filmmakers before leaving for Athens. "We're going for a medal." So too are Rubin and Shapiro. And they collect.