Will Smith On His Controversial New Film, Seven Pounds 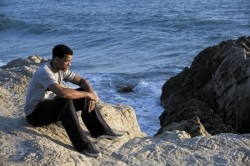 Like any veteran actor, Will Smith knows it's never good to give away a movie's ending. So when discussing his new film Seven Pounds a couple of weeks ago before a roundtable of reporters at Cleveland's InterContinental Hotel, he avoided saying anything that would explain what eventually happens to Ben Thomas, the distraught character he plays.

"I've become really fascinated with the idea of trauma and the idea of the re-creation of life after trauma, as well as the idea of loss and how do you continue after you lost something," says Smith of Ben, who's grieving the death of his wife. "It is such a powerful defining element of character. You talk to somebody, and after two or three days, you can take a pretty good guess at what their life trauma is from childhood, or that one trauma from their teenage years before they experienced that thing that is the thing that defines them."

For Smith, that happened when he was 15 years old and his girlfriend cheated on him.

"It totally destroyed my idea of cause and effect in my life," he says. "I thought you could be a certain way and do certain things and you would get certain rewards. That's really not true. That really ruined that idea." Seven Pounds reunites Smith with Gabriele Muccino, the director who made The Pursuit of Happyness. And like his character in that 2000 film, Smith plays a guy who's seemingly always running from one problem to the next in Seven Pounds. Posing as an IRS agent, Ben visits people in need and makes personal sacrifices so that their lives can become better. And yet, because he doesn't want to live with his pain anymore, he's on the verge of suicide and not even falling in love can save him. The drama gets to be a bit much, as the film often settles for sentimentality and goes to extremes to evoke emotions. Yet for Smith, it's another intense role for a guy who's as well known for his comedic turns in films such as Men in Black and Hitch as he is for portraying legendary boxer Muhammad Ali.

Smith says working again with Muccino, who spent about a year tweaking the original script, was rewarding.

"You have to trust the director," he says. "The kiss of death is when you don't believe what that person is telling you. You have to believe that they know what they're talking about. He has such a powerful insight into who I am. He sees all my tricks, like when I try to make mean faces and I'm not really feeling it. He'll say, 'Do not pose for the camera. You are acting angry but you are not really angry. Go back to your trailer, and get angry and come back.'"

Smith said it also helps to listen to music, something he learned from Bourne-again action man Matt Damon.

"Two hours before a scene, [Damon] has his headphones on and he finds pieces of music that take him to the places that he needs to be," says Smith. "He gave me about six or seven pieces of fantastic music. There's the theme from Platoon, 'Adagio for Strings.' I used that for The Pursuit of Happyness in the bathroom scene. I used it in I Am Legend for the choking-the-dog scene. I used it in the final scene in Seven Pounds. You use anything that can carry you to the space where you need to go. After awhile, you learn what things can take you to where you need to be." Smith, who has no projects on the immediate horizon, says he thinks of his career as a work in progress, even though he's clearly become one of Hollywood's biggest stars.

"I consider myself on the road to [success]," he says. "I feel like I'm successful right now, but I haven't reached the level of being the person I wanna be or the level of the person that my grandmother dreamed for me to be."