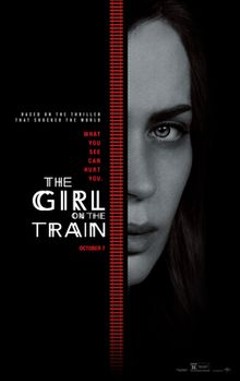 In the literary world, authors often use an unreliable narrator to keep audiences guessing. That technique works to great effect in The Girl on the Train, the new thriller based on the book by the same name. But while the movie effectively builds suspense and offers a major twist at the end, it often comes off too much like a soap opera.

The film centers on Rachel Watson (Emily Blunt), an alcoholic who rides the train from her Westchester home into New York every day even though she hasn’t worked in the city in months. On her rides, she often sees Megan (Haley Bennett) lounging on her porch in her skivvies because, well, that’s apparently what Westchester wives do during the day.

Rachel doesn’t know Megan, but she knows the neighborhood. She used to live down the street from Megan with her ex-husband Tom (Justin Theroux), who still lives in their old house.

Tom has since remarried and has a child with his new wife Anna (Rebecca Ferguson), something that upsets Rachel to the point that she once showed up at her old home, walked into the place and took the baby into her arms. Yep, all signs suggest she's a psycho. As a result, Tom treats Rachel like a pariah. He ignores her phone calls and tells Anna to keep away from her.

One day, Megan disappears. Just so happens, her disappearance coincides with one of Rachel’s blackouts — drinking too much will do that to you. When the cops start investigating, they immediately think Rachel might be responsible. It doesn’t help that Rachel can’t remember what she was doing when Megan disappeared. She does, however, recall seeing Megan on her porch making out with a guy who clearly wasn’t her husband.

When she informs Megan’s husband that his wife was having an affair, he figures out the mystery man must be her therapist Kamal Abdic (Édgar Ramírez). He send the cops to Kamal's place for a grilling but Kamal denies any wrongdoing.

When it comes to putting the pieces of the puzzle together, the cops don’t help much. While the story’s suspense undoubtedly stems from Rachel’s inability to clearly remember details from the day that Megan disappeared — and from her past, for that matter — the amount of repetition in the film becomes excessive.

The movie doesn’t focus much on compiling clues. Rather, it dwells on the drama, delivering explicit sex scenes that resemble something from 50 Shades of Grey. The acting is on the 50 Shades' level too. While Blunt effectively plays Rachel as a character you want to trust despite her flaws, Bennett, Theroux and Ferguson give forgettable performances. Allison Janney and Lisa Kudrow aren’t in the film long enough to merit any significant mention.

Since the book upon which the movie is based was a best seller, The Girl on the Train is likely to generate some serious revenue at the box office when it opens. But surprise ending aside, it doesn’t bring anything new to the genre.