The Chronicles of Narnia: Prince Caspian ups the action but loses some magic 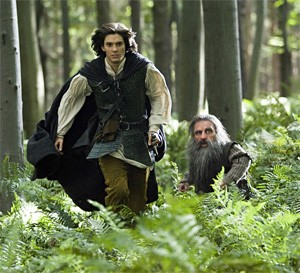 "Things never happen the same way twice." So booms Aslan the lion (Liam Neeson), popping his computer-generated head into The Chronicles of Narnia: Prince Caspian to pep-talk a bunch of discouraged Brits into fighting the good fight again.

As in life, so in sequels. Aslan and other once-key figures — and by extension the Christian ethics of author C.S. Lewis — are no more than bit players in the new movie by Andrew Adamson. Not that the first Narnia did shabby business in 2005 — $65 million its first weekend, over $700 million worldwide. But Part Deux comes with a visible mandate to bring home yet more bacon and attract a slightly older and far more male demographic.

If Prince Caspian falls to Indy 4 at the box office, it won't be for lack of manning up. Adamson has retooled the old-fashioned, handmade charms of his first Narnia into a schoolboy epic, strung together by CGI-laden action sequences, with men and boys wearing metal and showing mettle. Gone, aside from a fleeting resurrection of flash-frozen evil late in the day, is Tilda Swinton's White Witch, while sweet Pevensie sibling Susan (Anna Popplewell) comes to us improbably refurbished as a girl warrior. With bow and arrow in a tight squeeze, Susan repels the longing glances cast at her by Caspian (Ben Barnes), a deposed heir to the throne who has literally blown the suggestively phallic horn that Susan left behind at the end of Part One, to recall her to Narnia.

Inevitably, character and story suffer. Though Prince Caspian continues the first Narnia's terrified fantasy of the foreign occupation that lingered in England just after World War II, when Lewis wrote his novels, there's something both less magical and less human about the new incarnation. This time, the Pevensie children re-enter the world where they once earned the right to be Kings and Queens not via a musty old cupboard, but via the no-less-smelly London Underground at Trafalgar Square. The Narnia they find, abandoned by Aslan and by them, has fallen into disrepair. Nature itself has shut down — the trees don't walk, the animals don't talk. All that remains of the kingdom they left behind are some dignified centaurs and a potential resistance force, composed of gnarly-looking, mildly depressed short people with funny accents — in other words, Englishmen — and headed by a grumpy dwarf (Peter Dinklage) and a knightly mouse (Eddie Izzard). The marauders, by contrast, are a virile and vaguely Mediterranean bunch of thugs. The rest of the movie, with perfunctory pit stops for speeches about whether God owes man or vice versa, is armed combat between swarthy humans, buffed centaurs, and two boy-Brits quarreling over who has the bigger, er, sword. This all culminates in an entertaining final conflict featuring the biggest, hairiest water sprite you've ever seen, helping to restore peace, prosperity, and the Divine Right of Kings to Narnia.

Prince Caspian is fairly good fun — enough that my 10-year-old announced that she's had it with the cute penguins and will now attend only actioners, no matter how bloodthirsty. That may bode well for Prince Caspian's juvie box office. But a wimpy mother who grew up on the Narnia books misses kindly Mr. Tumnus, the cuddly Cockney beavers, and the growing-up struggles that played out on both sides of the land of War Drobe in the country of Spare Oom.

Hell, I'd even settle for a little more overt Christianity, though give or take the washing of self-sacrificing Aslan's wounds by two adoring females, even the first Narnia was about as Christian as The Golden Compass was atheist. As befits a movie whose target global audience is more likely to funnel its worldview through Buddha, Muhammad, or Mao than Jesus, Prince Caspian settles for more tactfully generic hints at higher authority. A pity that, other than the fights, everything else in the movie is equally bloodless.