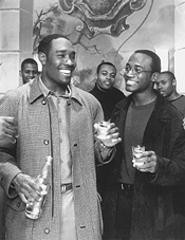 Morris Chestnut (left), getting his Diggs in.
Since there is no way to talk about The Best Man without eventually invoking the phrase "Spike Lee's cousin," let's just get it out of the way: The Best Man is the directorial debut of Malcolm D. Lee, who is Spike Lee's cousin. Having worked on various S. Lee films, M.D. Lee strikes out on his own (though under his cousin's 40 Acres and a Mule banner) with this romantic comedy-drama about a group of African American college chums reuniting for a wedding.

The film centers around Harper Stewart (Taye Diggs, from How Stella Got Her Groove Back), a Chicago-based writer whose first novel is just about to be published. Harper is flying off to New York to be best man at the wedding of football star Lance Sullivan (Morris Chestnut), his closest buddy from college days. Lance is due to be hitched to Mia Morgan (Monica Calhoun), his one true soul mate.

Even before he leaves, there are bad omens. Harper's girlfriend, Robin (Sanaa Lathan), is anxious because among the wedding party is up-and-coming TV producer Jordan Armstrong (Nia Long); and, in Harper's transparently autobiographical book, Jordan (under the name "Kendall") is described as Harper's (that is, "Jackson"'s) great unconsummated love.

But that's not the worst of it. When Harper arrives, he discovers that an advance copy of his novel has been making the rounds of his friends, so it's only a matter of time before Lance reads the scene in which the Mia surrogate sleeps with "Jackson." It was Mia's only lapse of fidelity -- a one-night stand years ago, when she sought friendly comforting to assuage the insult of Lance's continual and notorious philandering.

Lance, a constantly erring but nonetheless devout Christian, may find it in his heart to forgive Mia for cheating. (He certainly should, since he cheated on her nonstop for years.) But will he be able to forgive his best friend for cuckolding him? Or forgive either of them for lying about it all these years, making him look like a fool?

Acting as id and superego for the group are (respectively) Quentin (Terrence Howard), whose considerable intelligence is unfortunately combined with a streak of the sadistic provocateur, and naive, likable Murch (Harold Perrineau), who is oppressed by Shelby (Melissa De Sousa), his demanding, manipulative girlfriend.

The group dynamics are drawn entertainingly and with great insight. Except for Shelby, who is a complete caricature, Lee manages to deftly draw a large and diverse group of characters. But there are still questions that dog the plot -- especially, why has Harper put the scene with Mia in the book at all? Sooner or later, Lance is going to read it. "I thought that, once he was in the bosom of marital bliss, it would be different," Harper says, utterly unconvincingly. It might be better for him if Lance found out after Harper were out of town, but it would likelier be a lot worse for Mia. While novelists have been known to be irresponsibly imprudent with the intimate details of their friends' lives, Harper's wishful thinking seems really out of character.

Lee gets good performances out of most of his ensemble, but Howard's Quentin takes the prize. He is at points the most appealing, the most evil, the most pathetic, and the most admirable. Howard's restrained smirk is wonderfully effective.

Much of what Lee accomplishes here, however, is undercut by his flaws as a filmmaker -- in particular, his sense of pacing. While the middle section of the film moves along fairly well, the opening half-hour feels interminable and meandering: Exposition is stretched out far beyond our patience. And the film goes on for about twenty minutes beyond the moment that feels like the natural climax. Nor is the timing much better within scenes, particularly (again) during the opening and final half-hours. Lee's pace is slow enough to try viewers' patience.

While there are similarities between The Best Man and The Philadelphia Story, it would be unfair to compare a young director's first film to such an established masterpiece. A fairer comparison would be Theodore Witcher's 1997 Love Jones (also starring Long), which employed a similar serious-with-comic-moments tone to examine romantic goings-on among contemporary young black professionals. And it must be said that Witcher scored in most of the same areas and without the handicap of Lee's sluggish pacing.