Throw Down Your Heart screens at CMA tonight

A documentary about Bela Fleck's trip to Africa in search of the banjo's roots, Throw Down Your Heart screens tonight at 7 at the Cleveland Museum of Art Lecture Hall. Here is our review of the movie. 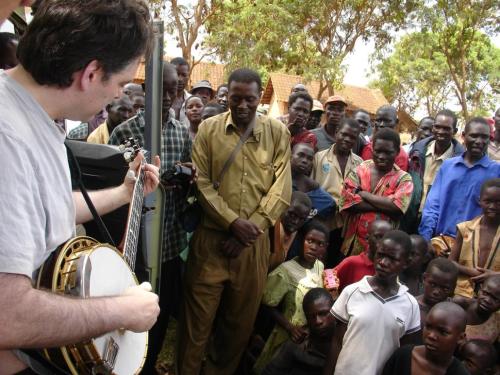 Throw Down Your Heart (US, 2008) In this documentary, American banjo man Bela Fleck heads to Africa to explore the instrument’s roots and to show that it shouldn’t simply be associated with its American “white Southern stereotype.” We follow Fleck on his trip. We see him playing banjo in the airport and performing on the streets of Uganda with local musicians. He appears in a wide variety of contexts, accompanying one man as he performs at his father’s funeral and joining up with a marimba player in Tanzania. To his credit, Fleck never comes as some rich white dude out to exploit the natives. Rather, he’s sensitive to cultural differences and tries to truly collaborate with the locals, making this more of a concert film than a documentary. But the performances are so good, that’s not a detriment. *** (Jeff Niesel)