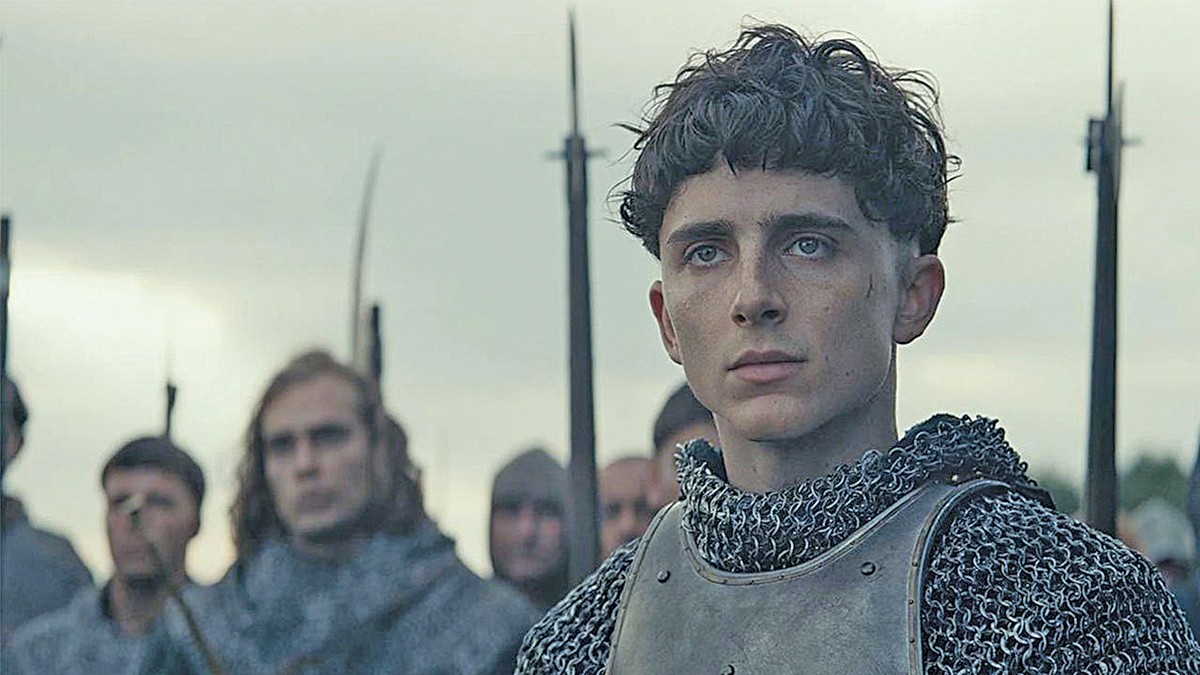 Prince Hal (Chalamet) is heir to the British throne but has embraced the dissolute lifestyle of a wayward son, marked by booze and women and slo-mo cavorting with his portly pal Sir John Falstaff (Edgerton), of Shakespeare fame. Hal reviles the tyrannical rule and bloody feuds of his father, King Henry IV (Mendelsohn), and when he's crowned himself, alters course in the direction of peace. This tendency is a grave concern to Hal's Christian-empire-loving advisors, among them William Chief Justice (Harris, of Mission Impossible villainy).

Against his best judgement, Hal is lured into France by the provocations of the haughty French dauphin Louis (Robert Pattinson, who electrifies in his one and only meaningful scene) and leads his troops into a climactic battle that draws heavily on Game of Thrones' "Battle of the Bastards," though falls short in both visual and emotional respects.

Based both on historical events, (the real King Henry ruled from 1413 until his death in 1422; the Battle of Agincourt was indeed a pivotal moment in the Hundred Years' War), and on Shakespeare's King Henry plays (Sir John Falstaff is not an actual historical figure), the film has the flavor of something based on actual events. It's furthermore full of the political machinations and vexed diplomacy that were hallmarks of GOT. But the film I kept wanting to emerge — an ahistorical Prestige-style battle for political supremacy between Chalamet and Pattinson — never arrived.

Directed by Aussie David Michod (The Rover), with a script by both Michod and Edgerton, the film is often heavy-handed in the communication of its themes. Power corrupts, for one. War is hell, for another.

The first hour, dallying on Henry IV's shittiness, might've been cut by half. But the fine acting carries what is often a sober account of political calculations. Both Tom Glyn-Carney (Dunkirk) and the newly ascendant Dean-Charles Chapman (GOT's Tommen) make the most of early supporting roles. Throughout, the careful cinematography captures the muck and terror of medieval life, to say nothing of medieval battle. Though in the final act, watching Chalamet prance among armored foes, knocking them dead by punching them in the helmet, was laugh-out-loud ridiculous. Sweet Timmy just doesn't seem all that imposing on the battlefield, it turns out.

More broadly, why do Netflix movies always seem kind of bad? I was compelled to ask myself if I would have responded with less of a shrug if the identical film were released theatrically. Maybe so. As it is, The King is just fine, but a little too bloated for enthusiastic recommendation.