An intriguing cover-up tale melts into a melodramatic mess. 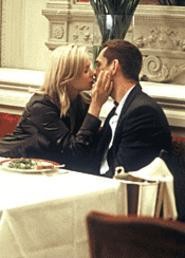 Too close for comfort: These next-door neighbors have some boundary issues.
It's the cover-up, stupid! It doomed Nixon during Watergate, got Clinton impeached, inspired outrage against the Catholic Church, and apparently it's just part of the day-to-day operations at places like Enron and Tyco. The initial crime is bad enough, but the conspiracy to hide it always ends up hurting more. Whatever happened to "Confession is good for the soul"?

Separate Lies, the directorial debut of Oscar-winning screenwriter Julian Fellowes (Gosford Park), is about how lies beget lies and how a seemingly perfect life can unravel in the blink of an eye. Adapted from the novel A Way Through the Wood, by English writer Nigel Balchin, the film probably works better on a "British" level -- that is, the issue of class distinction, arguably the underlying theme throughout the movie, plays an even greater role across the pond than it does in America.

James and Anne Manning (Tom Wilkinson and Emily Watson) seem blissfully contented. He is a respected and highly paid solicitor; she is his charming and attentive wife. Childless, albeit not by choice, they have a flat in London and a stunning home in the country. Being British, they are rather reserved emotionally, although James can get snappish when his domestic routine is disrupted. He is accustomed to things running like clockwork.

The film opens with a hit-and-run accident: An elderly man on a bicycle is knocked to the ground by a passing vehicle. The car does not stop. The victim, who dies in the hospital, turns out to be the husband of Maggie (Linda Bassett), the Mannings' house-cleaner. The police open an investigation.

James begins to suspect that their neighbor, Bill Bule (Rupert Everett), an arrogant, upper-class cad who has just returned from abroad, was responsible. He confronts Bill and urges him to turn himself in -- or else James will do it for him. Bill refuses, as if his privileged position in society somehow absolves him, if not from responsibility for the crime, at least from the necessity for punishment. After all, the dead man was a member of the working class.

Bill's cavalier attitude toward the crime offends James, who has set very high standards not only for himself, but for everybody around him. James is even more taken aback when Anne defends Bill, whom she barely knows. It is the first of many surprises to come, and it forces James and Anne to reexamine their priorities, their moral precepts, and their marriage.

It's difficult to critique Separate Lies without giving away significant portions of the plot. Suffice it to say that the characters will be more difficult to understand and to accept if you're not aware of how deeply ingrained class-consciousness is in the fabric of British society. More than aware, one must be on intimate terms with it. Otherwise, certain developments will feel quite ludicrous.

Yes, Separate Lies is also about how telling one falsehood inexorably leads to another, as well as what happens when characters fail to live up to the standards they have set for themselves and for others. But some of the dialogue and several of the emotional reactions are laughably melodramatic -- as if the film were, in fact, a parody of the British trait of keeping a stiff upper lip. That is clearly not what Fellowes intends, but the fact that the thought does cross one's mind is damaging enough.