Sandra Bullock fires off another Miss. 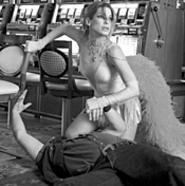 If you saw the first Miss Congeniality, you could phone this one in.
Before walking out the door to see Miss Congeniality 2: Armed and Fabulous, a colleague sneered, "Why do you even bother with that shit?" It's a question one's tempted to ask of its star, Sandra Bullock, as well. (Surely, our answers would be the same: The paycheck, pal. The woman has legal bills to pay, a fortune amassed in the Austin, Texas courthouse in which she battled a contractor who, she claimed, built her a $7 million teardown on Lake Travis.) Hers is a flaccid filmography you'd be wise to wipe off your feet before entering the house: The Net, Speed 2, Hope Floats, Two if by Sea, Practical Magic, 28 Days, In Love and War, and other mediocrities currently playing to the infirm and housebound on DirecTV's "premium channels." Her résumé ranges only from the middling to the so-so, the boring to the dull, the squishy to the icky. She's made more tepid romantic comedies than most people have romances throughout their entire lives.

Perhaps in another era, Bullock might have been an Irene Dunne, a screwball comedian with nuts. At her best, she's the cute klutz, the runway model prone to taking a dive if it'll get a laugh. But she's been reduced to nothing but roles that elicit the groan of numbing repetition; she's been there, done that so often that every movie in which she appears feels like a sequel to something she's already done, no matter the setting, scenario, or character. The fact that she produces these movies suggests that she has little interest in altering the formula. She could choose to do better work -- but why bother, when audiences lap up her assembly line of bland confections?

Besides, she'll never be Irene Dunne, because film comedies are no longer as sophisticated as they were when Dunne tangled with Cary Grant in The Awful Truth. Here, the best we can do is The Drew Carey Show's Diedrich Bader as the mincing, bitchy fashion consultant (the role relinquished by Michael Caine) and Ray's Regina King as the bodyguard with anger-management issues.

Miss Congeniality 2 is, in every way, a do-over of the original (as though there were anything remotely original about Miss Congeniality); it even contains the same plot line, in which Miss United States, Cheryl Frasier (Heather Burns), is once more the damsel in distress Bullock's FBI agent Gracie Hart has to rescue. This sequel exists only to sell the just-released "limited deluxe edition" DVD of the original -- copies of which, incidentally, now come with a free ticket to Miss Congeniality 2. Benjamin Bratt, the love interest in the first film, wisely stayed away, but is mentioned so often here, you'll walk out of the theater swearing he was actually in the damned thing. The movie acts as though we actually care about these people, when they're nothing more than props and products.

If the first movie played like a midseason TV pilot, its successor comes off like an extended episode of a generic sitcom; all it lacks is a laugh track -- appropriate, since it also lacks a laugh. But it does get one thing right: Its anorexic story line aside, Miss Congeniality 2 deals with how celebrity is really nothing more than being in the right place at the right time -- how it's simply a product of dumb luck, as opposed to any real talent.