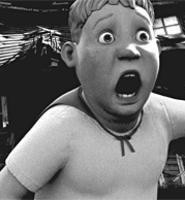 Monster House: The title pretty much says it all.
In the latest extravaganza from executive producers Steven Spielberg and Robert Zemeckis, millions of dollars and long hours in the digital animation studios have produced . . . a photorealistic, computer-animated, generic American suburb! Location costs must be getting pretty damn expensive nowadays. As Monster House begins, we follow a leaf slowly descending on the wind into the yard below, not dissimilar to the feather at the beginning of Forrest Gump. Every pixel, every vein in the leaf looks spot-on. Then a girl on a tricycle zooms by, and damned if she isn't rendered as crudely and plasticky as those artificially coiffed humans in the Duracell battery commercials a few years back.

There seems very little point in having this film be computer-animated -- in fact, the script was written with a live-action adaptation in mind. It was later thought that a final transformation in the movie's third act would be far too ambitious for the realistic approach, but honestly, what we see isn't that different from stuff that has previously been achieved via stop-motion animation.

The plot isn't much. Youngsters DJ, "Chowder," and Jenny are intimidated by a creepy old man named Nebbercracker (Steve Buscemi, animated in such a way that one can easily imagine how well he might have played Gollum) and his frightening old house, which seems to literally consume toys carelessly left on its lawn. When Nebbercracker apparently has a heart attack, the house gets even scarier, acting autonomously and making scary "faces" with its windows, door, and porch. Eventually the kids go inside, more or less copying the climax of every Harry Potter movie, in which the hero, the heroine, and their goofy friend go down into that scary room no one has ever entered and face supernatural trials. The coolest thing about Monster House is that Kathleen Turner's face was actually motion-captured to create the house's expressions, creating perhaps the most literally wooden performance of all time.

Motion-capturing Turner is one reason to use computers; another is the ease with which a CG cartoon can be translated to 3-D. Some theaters will get Monster House in this format, but no particular effort was made to present it that way for critics. It seems an odd call, but Disney similarly held back the 3-D version of Chicken Little, and Warner Bros. did likewise with the 3-D IMAX version of Superman Returns. If the filmmakers' fear is that critics tend to dislike special effects, they should recall that most of those who saw The Polar Express in 3-D IMAX two years ago came away with a far more favorable impression than they got from the 2-D version. The novelty of the experience, and the potential richness of digital 3-D, can overwhelm minor quibbles, and it's easy to see how Monster House might work better that way.

In fairness, though, the children at the press screening seemed to enjoy things far more than the adults. For this adult, however, actual human beings onscreen might have ratcheted up the tension, of which there is none.