VIDEO: Former Cleveland Heartthrob Chris Van Vliet Gets Hit On By "How To Be Single" Stars 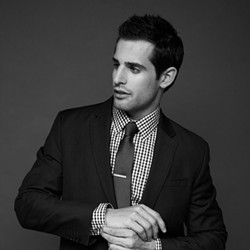 @ChrisVanVliet
Friday, during a promotional interview for the new film How to Be Single, starring 50 Shades of Gray's Dakota Johnson, former Cleveland entertainment reporter Chris Van Vliet got royally hit on by his interview subjects.

Van Vliet, a Canada native, worked for 19 Action News and WDOK for nearly five years. He took his talents to South Beach last year and is now an entertainment reporter for Miami's Fox affiliate WSVN. He's on the nightly entertainment show Deco Drive.

During the "interview," both Johnson and co-star Leslie Mann (George of the Jungle, Big Daddy) don't give Van Vliet any time to ask his questions.

First it's his cute socks. Then it's his handsome face. Then it's his incredible muscles — #swollpatrol, Johnson avers. In due course, the celebs invite Van Vliet to conduct the interview with his shirt unbuttoned.

Van Vliet, ever the charmer, obliges.

This is precisely the sort of thing that these promotional film junkets are intended to accomplish, so don't lose sleep over the two minutes that Johnson and Mann commandeered.

Obviously, the How to be Single stars were unaware by whom they were being interviewed: Cosmopolitan's 2011 Bachelor of the Year.

Hey @JuddApatow your wife asked me to removed my clothes during an interview today. I just felt I needed to tell you https://t.co/VRRONQddgG