'Black Panther,' Steeped in African Imagery and Mythology, Will Be Box Office King 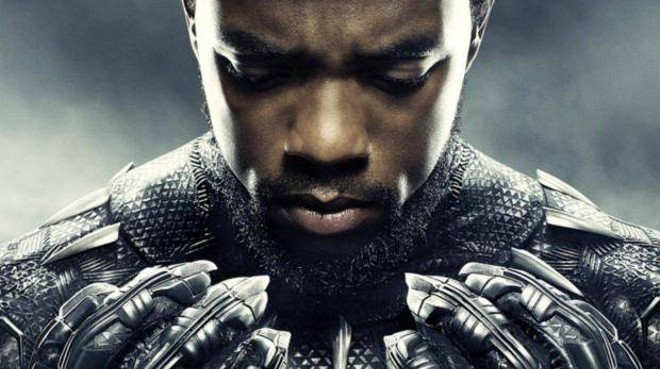 Chadwick Bozeman as T'Challa, King of Wakanda
Black Panther, directed by Ryan Coogler and starring Chadwick Bozeman, Michael B. Jordan, Lupita N'yongo, Danai Gurira, Daniel Kaluuya and others, will triumph at the box office when it opens this weekend. And that's not up for debate: It has already set the record for highest advance ticket sales among all the films in the Marvel Cinematic Universe.

Like other blockbusters screened early for critics, the studio has politely asked that we refrain from revealing spoilers or detailed plot points. But those familiar with the Marvel films will recall that the T'chaka, King of the (fictional) African nation of Wakanda, was assassinated in Captain America: Civil War.

In Black Panther, the throne falls to his son, T'Challa (Bozeman), to whom we were introduced in Civil War via a heart-thumping chase scene. His reign is immediately beset by complications, among them the prospect of vengeance and the rise of a usurper. Underscoring the action-packed threats to T'Challa's leadership are sweeping moral and political questions: What responsibility does Wakanda, home to the world's rarest and most advanced metal, have to share its technologies with struggling peoples — specifically black peoples — the world over?

Answers to those questions, and to other important questions related to the film (including, I expect, what it says about colonialism and patriotism), will be answered in the coming weeks. By others: certainly not by me. It's enough to say that Black Panther is instantly recognizable as an important cultural milestone, directed by and starring young, vibrant black artists, portraying an African nation steeped not only in myth and tradition but extremely high technology.

Other than that, I'll take a cue from the film's Everett Ross (Martin Freeman), a CIA tag-along. Without spoiling anything, in one scene, Ross attempts to explain a situation to a Wakandan tribal leader but is interrupted, literally barked at, first by the chief and then by everyone in the room. It's a hilarious and striking moment. "Say one more word," the chieftain advises, "and I'll feed you to my children.

"In a video posted to Twitter in December, which has since gone viral, three young men are seen fawning over the “Black Panther” poster at a movie theater," Wallace writes. "One jokingly embraces the poster while another asks, rhetorically: “This is what white people get to feel all the time?” There is laughter before someone says, as though delivering the punch line to the most painful joke ever told: “I would love this country, too.”"