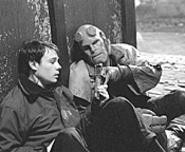 Hellboy: Fanboys strung out on the comic can get their fix here.
The Golden Age of the Comic Book Movie has turned the color of tarnished copper. But there is no going back, not when comic shops have become movie studios' research and development labs. No moving forward, either; the comic-book movie has become a cinematic smudge once more, one blurring into the next till they're all the same unfocused glop on the big screen to anyone over the age of 30, who wouldn't know Bruce Banner from Peter Parker. The geek will stand and applaud the faithfulness to the text; he (or she, as if) will giggle at the in-jokes and appropriation of panels lifted straight from the page; his jaw will drop at the sight of his favorite hero blown up 20 feet tall. But, alas, what of the movie?

Hellboy, based on Mike Mignola's beloved Dark Horse comic and adapted by Guillermo del Toro, is fanboy heroin: The cult hero (Ron Perlman) with bright-red skin and sanded-down horns and a right hand that fits into the gateway to hell has been loyally rendered, a gift from one self-proclaimed geek to the legions of worshipers. The story, about Nazis and black magic and doorways to hell has been culled from several story arcs familiar to readers of the series. Del Toro, working with frequent collaborator Guillermo Navarro behind the camera and Mignola next to it, has lifted panels directly from the comic books.

But when the filmmaker becomes caretaker, beholden to the creator who lurks over his shoulder, the audience of nonbelievers is left out in the cold, because they will not be carried through the excruciatingly dull moments by cute asides and coy nudges. They will not understand a word of its pseudoscientific gibberish or its black-magic mumbo-jumbo; a colleague left the screening wondering, "What language was that in?" They are more likely just to marvel at Hellboy, with its replicating giant-squid demons, resurrected Rasputins, and scenes shot in subways and sewers, and wonder whether one League of Extraordinary Gentlemen per decade isn't enough.

To offer a plot synopsis of Hellboy is to realize that no grown man should have to tell you about Nazis with Rocketeer helmets and sand for blood teaming up with Rasputin (Karel Roden) to open the gateway to hell, thereby turning earth into the devil's playground.

The best scenes in the film involve Hellboy's relationship with his adopted "father," Professor Bruttenholm (John Hurt), who discovered him when he was just a Hellbaby in Scotland in 1944. They bring a welcome warmth to the chill of watching computer-generated monsters being chased through streets and subway tunnels by a giant actor in a red bodysuit. Bruttenholm, dying of cancer, just wants his Hellboy to become a decent man, even if it means grounding him; Hellboy just wants to please his pop. But these scenes are scant. As a result, the movie feels very Alien without the terror, or Men in Black without its smirky charm.