Will in the Way

Winter Passing's father-daughter drama is undermined by Will Ferrell. 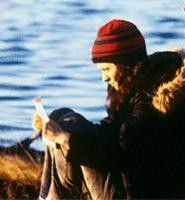 A box of letters opens up a can of worms for daughter Reese (Zooey Deschanel).
From the stars of Elf, here's a new drama about depression and family baggage! Might not want to bring the kids to this one, lest they wonder why Buddy the Elf's girlfriend is drowning a kitten and deliberately slamming her fingers in cabinet drawers. On the other hand, the two movies do have some things in common: Both Elf and Winter Passing are tales of reuniting with distant fathers at wintertime, during the course of which Zooey Deschanel gets to sing and Will Ferrell gets to act childish.

Deschanel plays Reese, a New York stage actress/bartender who numbs herself to the world with cocaine and booze, then desperately tries to make herself feel something through instant-gratification sex or the aforementioned finger-slamming. To make matters more complicated, she's the daughter of reclusive author Don Holden (Ed Harris), whose last name is a none-too-subtle reference to J.D. Salinger and who is similarly sought out by those who hope against hope that he'll crank out a new masterpiece someday. But since they can't get to him, they bother Reese in the meantime, and she's not exactly her father's biggest fan. Nor does she expect any new gems to be forthcoming -- of his last attempt, which made it to 37 pages, she says, "There were so many spelling errors, his editor thought he was trying to capture the voice of an illiterate."

Adding to the gloom surrounding Reese is the death of her mother, which comes with an inheritance -- a box of her father's letters. It's a box that's worth $100,000 to literary editor Lori Lansky (Amy Madigan), but it has to be claimed back home. So Reese gets on a bus back to Michigan to get what's coming to her. While there . . . yes, you guessed it . . . she's going to learn a little about family and realize that some things are truly priceless, or something like that. Anyway, she's not going to bury her sorrows in sex here, because all the guys are too old and unappealing; girls like Zooey Deschanel fall for guys like Will Ferrell about as often as real Christmas elves appear on the streets of New York.

Ferrell plays an itinerant musician named Corbit, who, having been kicked out of a Christian rock band called Punching Pilate, now lives in Don's house, where he functions as self-appointed security, Don himself having long since moved into the garage. When we first meet Corbit, he's demanding to see some ID from Reese before declaring, "Well, I gotta go rock. If you see Mr. Holden, tell him his balls are clean." Initially, this kind of understated deadpan from a comic actor known for screaming midlife crises seems refreshing, but after he's mentioned wolverines, his martial-arts skills, and his "pretty sweet" sound system -- and unexpectedly shone at an open-mic night -- it becomes increasingly obvious that he's cribbing from the Napoleon Dynamite playbook. Sorry, Will, but it's hard to buy that flippin' routine, coming from you.

Also in the house is Shelly (Amelia Warner), a former student of Don's, of whom Reese assumes the worst (asking her age, Reese explains, "I just wanted to do the math, in case you're fucking my father"), but the truth turns out to be more complicated. Given the timing of this film's release, though, Reese's put-down line "Why don't you go back to Narnia?" is particularly hilarious.

Ferrell and Warner, however, are distractions -- the obligatory dose of "eccentricity" thrown in as seasoning to make the real story more digestible. But they serve instead as irritants; too much spice, if you will. What's real and true about Winter Passing is the relationship between Don and Reese, the father and daughter who wear their damaged dynamic on their sleeves for all to see. He's a frail drunk who's going senile, occasionally spacing out mentally or experiencing tremors, and she may be headed down that path, if nothing changes. Harris captures the arrogance and self-centeredness of an artist who neglected his loved ones in pursuit of glory, then lashed out when he couldn't retain it; yet he still commands some sympathy for the feeble shell his Don Holden has become. Deschanel's Reese is perhaps more identifiable to us, but there's still a sharp reflection of the father in there.

Corbit and Shelly, however, fail to really pay off. Why are they there? Is Shelly in fact fucking Don, or was she ever? What does Don see in Corbit that makes him trust the guy? These feel like characters written for different actors. As played here, they detract from the Winter Passing's vital, worthwhile heart.