Ferrell kicks and screams his way to another hit. 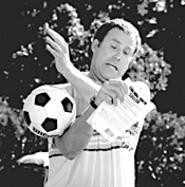 Doing what he does best: Will Ferrell clowns all the way to the bank.
Kicking & Screaming might be the most predictable movie of the year, but that's not necessarily a bad thing. Think about it: How many times have you gone to a movie and gotten far less than you were expecting? Here, that's not a concern -- you may not get more than you thought, but it delivers exactly what you think it will. Namely, Will.

Fans of Will Ferrell's repressed-crybaby persona have the first half to enjoy, while those who prefer nutcase, running-around-naked Will get that later. The catalyst for the change turns out to be coffee; if you'd like your kids to stay away from caffeine, Kicking & Screaming is the ultimate public service announcement.

Ferrell plays a nebbishy vitamin salesman named Phil, who has forever lived in the shadow of his ultracompetitive father, Buck -- played, in an odd bit of stunt casting, by Robert Duvall. Though we learn early on that Phil is no great shakes as an athlete and therefore no threat to his father's masculinity, Buck can't stop one-upping him anyway, announcing his remarriage on the same day that Phil announces his first marriage and even producing a new baby at the same time as Phil does -- one that happens to be bigger by an ounce.

Buck is so driven that when he ends up coaching a kids' soccer team, he benches his own grandson, Sam (Dylan McLaughlin), before trading him away to the worst team in the league, a group of misfits ironically named the Tigers. When the Tiger coach mysteriously disappears, Phil finds himself stepping in -- and in way over his head. That is, until he enlists the help of Buck's angry neighbor . . . Mike Ditka. Ditka introduces Phil to coffee, and things spiral out of control from there.

Father-son competition is hardly a new cinematic idea, nor is the story of fathers pushing their sons too far. Ferrell and Duvall are the right guys for the job, though, as midlife crisis and tough ol' bastard are their respective specialties. The surprise is that Ditka holds his own in a major role. Granted, he's playing himself (with an actress playing his wife), but that's not always an easy thing to do, especially when the role requires you to appear borderline abusive toward children.

Director Jesse Dylan, who gave us American Wedding and How High, will probably have his biggest hit with Kicking & Screaming, but he needs to work with his editors (three are credited) a little more. At times, jokes are spliced up against jokes in disorienting ways, apparently to keep the laughs coming regardless of continuity. Wait, suddenly everyone's in a different room? But they didn't even look like they were leaving the last one? What happened? Oh, wait, joke. Ha-ha! Whoa, now where are we? Oh, Will's saying something funny again -- never mind.

The real credit should go to whoever arranged all the music clearances. "Eye of the Tiger," "Chariots of Fire," "You're the Inspiration," "Let's Get It Started," and "We Are the Champions" are but a few of the anthems on display that are so viscerally hardwired into our popular culture that they unfailingly elicit a reaction.