Tracking Untraceable's lamebrained logic, we're all to blame for this massively dumb movie. 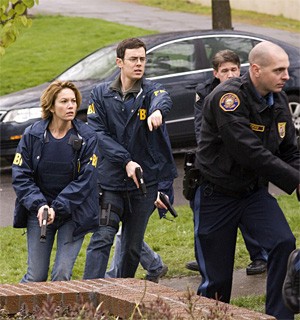 Diane Lane and friends in Untraceable: Where are you, Anthony Hopkins, when we need you?

Regarding the irrelevance of Untraceable: First of all, torture is so 2007, and just because this drab little thriller imagines itself a "critique of violence" doesn't make it any less superfluous. Second of all, untraceable? Ha! You wish. While it's true that the villain of our tale, a precocious psychopath hosting real-time snuff videos on the internet, proves tricky to hunt down, the provenance of the movie itself is obvious: The Silence of the Lambs meets Saw, dude.

Diane Lane is Jennifer Marsh, special agent in the FBI cyber-crime unit in Portland, Oregon. Alerted to the website killwithme.com by an anonymous tipster, Marsh and her geeky sidekick, Griffin Dowd (Colin Hanks), watch in horror as some online nut-job tortures and kills Lulu the cat. "This is just the beginning!" notes our prophetic heroine, and so it shall be.

Enter Eric Box (Billy Burke), a generically foxy homicide detective packing bedroom eyes and penetrating existential queries. "When did the world go so fucking insane?" he wonders, as the internet killer upgrades his crazy on human prey. Propped upright before a webcam, bleeding from deep incisions spelling "Want to kill with me?" across his chest, the latest victim is plugged into an anticoagulant IV drip synced to a page-hit counter. The more people that watch, the quicker the drip goes; the quicker the drip, the faster he dies. His life, you see, depends entirely on . . . you! You as in YouTube, Time magazine Person-of-the-Year, sadistic, voyeuristic, media-addled you. Hella subversive, no? Can't stop watching, can you? Feeling just a wee bit implicated, hmm?

Untraceable connects its pay-(with your life)-per-view conceit to one legitimate if fleeting moment of dread, when the cyber-crimes crew gathers around a massive video projection of the snuff scenario in progress. They helplessly watch as the page-hit counter shoots into the millions — with a dozen or more of those hits generated on their own computers. Were Untraceable invested in ethical conundrums rather than pop-psych high concept, this grim scene might have dropped a proper mindfuck.

Next up on killwithme: Some poor chap gets hog-tied to a battery of heat lamps; another gets dunked in a tank of water slowly mixed with acid. Untraceable being a movie about the effect of violence in the media (or something), each new murder scenario wraps quicker than the last, as hordes of new viewers log on to gawk at torture and snark it up on the message board. Damn you, media! Damn you, you!

Meanwhile, the mastermind of this elaborate nastiness, a disgruntled twerp named Owen (Joseph Cross), gloats in his basement lair amid hordes of computer equipment and the requisite flickering fluorescents, corkboard collages, and canned-fetus art installations of the contemporary movie serial killer. In addition to his gift for diabolical multimedia, Owen is distinguished by his major daddy issues, though I leave you to discover the precise inspiration for his repellent online project.

Directed by Gregory Hoblit from a screenplay by a trio (a trio!) of writers, Untraceable hasn't the brains of a class-act psychothriller like The Silence of the Lambs. Worse yet, it lacks the balls to juice up the trashy verve of the Saw series. Stuck in the middle, it leaves everyone stranded, actors and audience alike. Lane, poor thing, acts the pro, cool and confident, keeping as dry as she can in this sad, soggy affair.