Marvel's mutants are a modest squad of dullards in this frustrating adaptation. 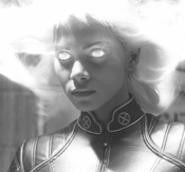 Cyclops flashes the high beams.
In Bryan Singer's last movie, 1998's Apt Pupil, Ian McKellen portrayed a Nazi war criminal hiding out in the suburbs, passing himself off as an ordinary old man crouching behind drawn blinds. In Singer's new movie, X-Men, McKellen plays Erik Magnus Lehnsherr, the son of Jews who were murdered at Auschwitz. In the film's first scene, a young Eric (Brett Morris) watches as his parents are led to the ovens, and his mutant powers are revealed: With a handful of Nazi guards in tow, the boy bends the gates of the concentration camp, but his anguish can't free the doomed. He can only watch helplessly; his powers are useless. Lehnsherr grows up to become Magneto, a mutant who can control metal and create magnetic fields, and he devotes his life to destroying those who would eradicate mutants simply because they were, as he explains, "born different from those in power."

That Singer, working with a script by first-timer David Hayter and a number of uncredited writers (including The Usual Suspects' Chris McQuarrie and Buffy the Vampire Slayer creator Joss Whedon), sets up his bad guy as a sympathetic character is X-Men's most novel conceit. In the comics, Magneto is a costume-clad baddie, obscured by helmet and cape; he's evil in hot-pink tights, archenemy to the mind-reading Professor Charles Xavier (played in the film by Patrick Stewart) and his band of mutant Boy Scouts, the X-Men. Here, McKellen plays him as a misguided victim obsessed with turning the world's leaders into mutants in order to call off Washington's witch hunt, led by Senator Robert Kelly (Bruce Davison, playing a modern-day Joe McCarthy). By turning Them into Us, the mutants will no longer be pursued by government officials seeking to pass the Mutant Registration Act. The "different" will become the norm, safe from persecution.

But making a movie out of a discrimination metaphor is tricky business, especially when it comes bearing nearly four decades of comic-book baggage, and Singer comes up short. He has always insisted he wasn't out to make a men-in-tights action adventure, but a character-driven drama, and the fact that he fails on both counts makes X-Men an ambitious, frustrating drag. In trying to Say Something, Singer offers barely a whisper of a film, one that's likely to disappoint fanboys and bore the uninitiated; it's pedantic at best and pedestrian at worst. By the time X-Men crawls to its anticlimactic finale atop the Statue of Liberty (Singer's dreary homage to Alfred Hitchcock's 1942 Saboteur), it feels disinterested and disconnected. X-Men is, in the end, just an overlong setup to a sequel, raising more questions than it has smarts or guts enough to answer.

An early, abbreviated version of the script, which has floated around the Internet, hints at what the final film misses: the wonder and danger found in former X-Men writer Chris Claremont's hit comic books. The "scriptment" opens with short snippets of origin stories: Magneto at the gates of Hitler's hell; a young Ororo Munro unleashing her meteorological fury in 1978 Africa, before she grows up to become Storm (Halle Berry); and a young Scott Summers (later to become Cyclops, played by James Marsden) destroying his high-school gymnasium with eyes that "glow like embers." These short scenes, not found in the film, give us people to care for; we know their anguish as they wrestle with their powers. But by the time we're introduced to these characters in the film's hallowed hallways of Professor Xavier's School for Gifted Youngsters, they're just superheroes -- two-dimensional, made of ink and paper.

The only character given any background is Rogue (Anna Paquin), whose touch is lethal: She absorbs energy from those with whom she has contact, until she literally drains the life out of them. Rogue becomes the film's centerpiece -- Magneto needs her to power his mutant machine -- but Paquin's not up to the task. Her most deadly power is her ability to mope; she could whine you to death. But even the most significant hero in the film is a nonentity: Singer can't be bothered with characterization, despite his grand aspirations to make a comic-book movie without the pulp. As a result, the movie becomes one long, mundane special-effects sequence; the actors, hiding behind visors and beneath wigs, are moot -- especially Famke Janssen as Jean Grey, a telepath with nothing to do. (Magneto's Brotherhood of Mutants, including Ray Park as the tongue-lashing Toad and Rebecca Romijn-Stamos as the shape-shifting Mystique, are more intriguing: The bad guys usually are.) No wonder only the rookie Hayter is credited with the script; likely, no one else wanted the blame.

There's a reason Wolverine, who possesses a skeleton partly made of indestructible metal, was the only well-known X-Man to be given his own spin-off comic: He's the one member of the team with charisma. Hugh Jackman -- whose face is partially obscured by sideburns and stubble, sure to please the fact-checking fetishists -- wants nothing to do with this band of mutants. At the film's outset, he's the surly loner, content to make a few bucks dueling it out with Canadian truckers in caged bare-knuckle brawls. Not only is his skeleton made of steel, but his wounds heal in seconds as well. He's as close to invincibility as any of the X-Men.

Wolverine's origin story is never revealed; it's merely hinted at in vague flashback, in dream sequences far more disturbing than anything else the movie offers. It's suggested that he's the product of a hideous experiment, yet another allusion to Nazi atrocities, but such revelations never occur. Wolverine then becomes our cynical stand-in -- the nonbeliever trapped in Fantasyland. But the movie's alive only when Wolverine's onscreen; it's built around him, and it crumbles without him to prop it up. He's the smartass and the badass, leery to the point of disdain. He mocks the wheelchair-bound Professor Xavier ("What do they call you -- Wheels?") and taunts Cyclops ("Keep your eye open") with gleeful derision. He is, in some ways, the most real of the mutants.

Cyclops is simply too much of a square to hold our interest; he is, as Wolverine rightly assesses, "a dick." Storm, with her blank eyes and banal power (she whips up wind and lightning), barely exists at all. And Jean Grey is too much of absolutely nothing -- though what is one to do with a superhero whose sole power is that she can move objects and read minds? It's telling that the film's best moment comes when the Toad leaps offscreen and crushes a man to death: The audible squish makes for a terrific punch line.

What's most frustrating is that the movie hints at a brewing war between humans and mutants, but never follows through: Senator Kelly's early rants (during a speech on the Senate floor, he holds up "a list of known mutants") are merely a taunt -- an excuse. The movie plods toward a mutant-on-mutant climax, which is so badly directed that you can barely tell who's fighting whom; with their generic black outfits (a poor stand-in for the comic's bright yellow-and-blue uniforms, which are made fun of late in the movie), the X-Men all look alike in the dark. So much for metaphor.

More maddeningly, the film feels as though it's missing huge chunks; it defies its own logic (especially any scene featuring Mystique). To rectify that, Marvel has released a series of comics that fill in the blanks, and in doing so, has turned the comic-movie tie-in into the most cynical marketing ploy this side of the Pet Rock. To understand the movie -- the characters' pasts, their motivations, their relationships -- you have to buy the comics, which explain how Professor X and Magneto met, how Wolverine came by his indestructible skeleton, how Rogue was the target of government operatives. All that may sound like mundane fanboy garbage (and it is), but it's more like lazy storytelling. It's the ultimate give-up, an admission of guilt: The movie's plot is utter nonsense . . . until you read these. Turns out the most powerful mutant of all is Greed.