4 Concerts to Catch in Cleveland This Weekend 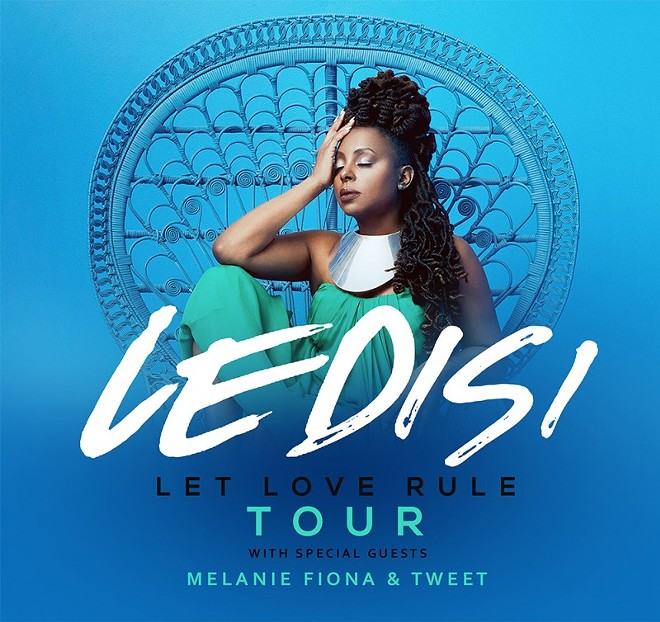 An R&B singer who could hold her own at a jazz festival, singer-songwriter Ledisi possesses some serious pipes. Her new album, last year's Let Love Rule, represents another significant chapter in a career that stretches back nearly 20 years. One of many album highlights, "Us 4Ever" features soulful vocals and a cameo courtesy of BJ the Chicago Kid. There's a notable local connection too. Guitarist Eric Potapenko, who performed a few years back with the local band Gravity in the Tri-C High School Rock Off, plays in her touring band. (Jeff Niesel), 8 p.m., $45 ADV, $50 DOS. House of Blues.

When singer-songwriter Jackson Browne performed at E.J. Thomas Hall in Akron a few years ago, he impatiently listened as hecklers yelled out for their favorite tunes. But in the end, it was the music that won out, even in the midst of all of the interruptions. The three-song run of "Doctor My Eyes," "The Pretender" and "Running On Empty" that closed out the main set was among the many reminders that Browne has accumulated a powerful catalog of work across the decades that he's been active as an artist. Expect a similar performance tonight. (Matt Wardlaw), 8 p.m. Hard Rock Rocksino Northfield Park.

A couple of years ago, the locally based Elevation Group launched LaureLive, a two-day music festival held at Laurel School, an all-girls (K-12) independent school. Elevation Group has again organized a 2018 festival, which will take place on Laurel's Butler Campus today and tomorrow. This year’s event will feature “the biggest lineup in the three-year history of the festival” as the artists cumulatively have over 60 million monthly listeners on Spotify and nearly 10 million likes on Facebook. The lineup features the alternative band Foster the People, singer-songwriter Brandi Carlile, retro rockers Fitz & the Tantrums and indie rockers Cold War Kids. Other notable acts include Trombone Shorty & Orleans Avenue, Daya, Red Wanting Blue, Magic Giant and the Record Company. Artists such as Rag'N'Bone Man, Arizona, Lauv, Lewis Capaldi, the Aces, Morgxn, Castlecomer and Future Generations will make their debut appearances in Cleveland. Check the website for a schedule and ticket prices. (Niesel), laurelive.com.

Best of Damnation of Adam Blessing

Ray Benich, the original bass player from the locally based '70s band Damnation of Adam Blessing will perform songs from the entire back catalog of Damnation of Adam Blessing at tonight's special show. He and his group will also offer up some Cleveland-centric “rock 'n' roll trivia” and will have copies of the band's recently reissued albums on hand as well. Additionally, the first 50 guests will receive the free “exhibit A” DVD, which has the only known live footage of the original band in existence. The Ray Benich Band includes drummer Tony Mazzone from Wild Horses and violinist and guitarist Tom Brehm from Dragonwick and Moonlight Drive. (Niesel), 7 p.m., $10 ADV, $12 DOS. Music Box Supper Club.