5 Concerts to Catch in Cleveland This Weekend 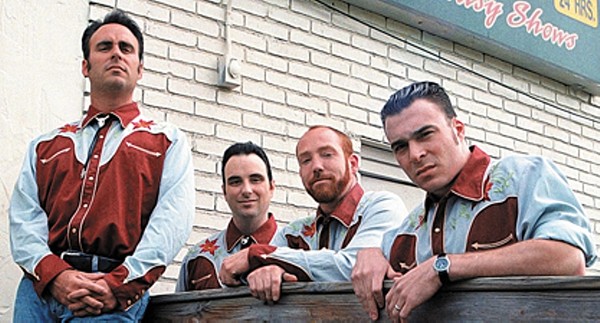 Before breaking up in 2005, the Cowslingers had made a name for themselves as a prominent local cowpunk band with a huge fanbase. The group created its unique sound by drawing from Link Wray, the Cramps, Johnny Cash and Jason & the Scorchers. Now, the band has announced the release of a new album, Real Big Rooster. Tonight's show serves as a release party for the new disc. The group hasn't issued a new studio album since 2005's Bullseye and has only played a handful of shows since 2005; during the last decade, singer Greg Miller and drummer Leo Walsh have devoted themselves to their band, Whiskey Daredevils. For the new album, the band recorded at Detroit’s Rust Belt Recording with frequent Whiskey Daredevil collaborator John Smerek. The Blasters-like “Cindy” features a walking bass line, twangy guitars and hiccupping vocals while the gritty “Waitin’” has more of a punk feel to it. All in all, the album represents a fine return to form. (Jeff Niesel), 8:30 p.m., $10 ADV, $12 DOS. Beachland Ballroom.

Now 60, veteran singer-songwriter Fred Eaglesmith says he intended to make an album that reflected his age. “I wanted to make a record that sounded like I was 60 years,” he says of his latest release, Standard. “My friends make records that sound like a hair transplant. I don’t want to do that. Rock ’n’ roll is a young person’s game, though it’s an old person’s game now because young people don’t want to participate. I listened to the vinyl version of Standard the other day and realized I did what I wanted to do.” Songs such as the bluesy “Flames” and the brittle ballad “Jenny Smith” come off as evocative, narrative-based tunes that show off Eaglesmith’s remarkable lyrical abilities. “It was a troubled record and a hard one to make,” he says. “My wife came down into the basement one day and hip-checked me into the corner and told me she wanted to work on it. Unbeknown to us, she had these natural abilities for doing this. It immediately came together.” (Niesel) 8 p.m., $20 ADV, $22 DOS. Beachland Tavern.

A mix of blues, soul and Americana, Good for My Soul, the latest effort from Bill Toms & Hard Rain features a collection of tunes that sound so familiar they could pass for standards. With its woozy horns and raspy vocals, "I'd Be a Rich Man Today" kicks the album off with a bang. Toms launched his career some 30 years ago as the lead guitarist in Joe Grushecky and the Houserockers, a regional sensation that has always had a strong following in Cleveland. He's been cranking out quality albums and touring ever since. (Niesel), 8 p.m., $8 ADV, $10 DOS. Music Box Supper Club.

A staple in the Cleveland blues scene — and in the American music circuit at large — Travis “Moonchild” Haddix has always brought the heat to the stage. He also surround himself with great musicians — like a tight, tight brass section. What he has always done so well has been his steady merger of classic blues structures with smooth R&B-style singing. He makes the blues accessible to anyone willing to listen and, inevitably, dance. And having been playing guitar since he was 7, the dude can tear it up quite nicely. He once told a music writer, “I am the best that I can be, and since no one else can be me, there’s none better.” Right on. (Eric Sandy), 8:30 p.m., $15. Nighttown.

You probably remember Tyler Hilton from his time on CW's soapy One Tree Hill and also when he played Elvis in Walk the Line. These days, Hilton continues to dabble in acting, but he's still an introspective singer-songwriter at heart. He comes through Cleveland tonight with fellow musician and OTH co-star Kate Voegele, a hometown native who now lives in California. With her brand new single, "Shoot This Arrow," Voegele's released a tune that speaks out against sexual harassment. She told Variety last month that the song is "for everyone who needs the courage and strength to speak up about what they’ve been through and for anyone who has ever felt taken advantage of, abused, or manipulated.” Expect to hear the techno-based ballad at the show. (Laura Morrison), 7 p.m., $20 ADV, $25 DOS. Music Box Supper Club.