5 Concerts to Catch in Cleveland This Labor Day Weekend 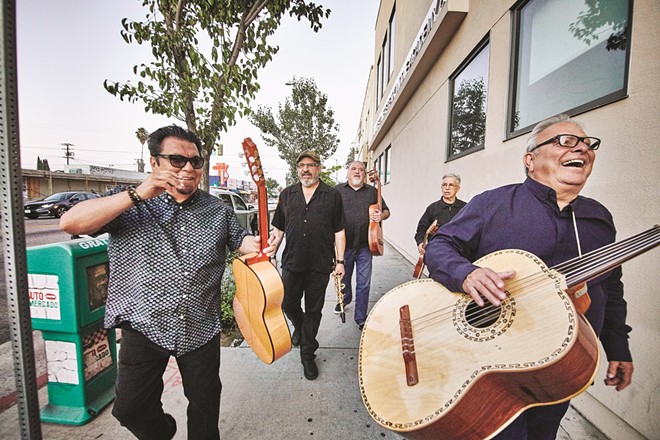 With the mantle of Tex-Mex zydeco rock ‘n’ roll gracing their legacy, Los Lobos have been infusing the American scene with a south-of-the-border flair for more than four decades. They’ve dropped many albums, including 2015’s Gates of Gold, which keeps pace with David Hidalgo’s head-nodding, rhythmic songwriting and the all-hands-on-deck knack for getting listeners dancing and thinking. Everything from the upbeat “Made to Break Your Heart” to the downtrodden “There I Go” is of a piece on this one, and one would do well to rewind a bit and revisit the band’s classics, as well. (For my money, their best tune is the haunting “When the Circus Comes,” which details the pain and agony of a relationship fading into the ether.) They've just returned from a swing through Europe. (Eric Sandy), 8 p.m., $45-$55. E.J. Thomas Hall.

Jazz guitarist Pat Metheny launched his career with a bang. In 1974, he appeared on an album with pianist Paul Bley, bassist Jaco Pastorius and drummer Bruce Ditmas. He didn’t even know the session he played was being recorded. But he left a lasting impression and would release his debut album, Bright Size Life, in 1976. His unique improvisational style that blends “the loose and flexible articulation customarily reserved for horn players with an advanced rhythmic and harmonic sensibility,” as it’s put in his bio, quickly turned him into a sensation. There’s a vibrancy to his playing that’s apparent on Pat Metheny Group’s self-titled debut that came out in 1978. The complexity of tunes such as “Phase Dance” and “Jaco,” tracks that feature the electric guitar prominently, suggest his prodigious talent. His Side-Eye project pairs him with two young players and promises to be an equally engaging affair. (Jeff Niesel) 8 p.m., $62-$77. The Kent Stage.

A veteran local group, JiMiller Band “blends together blues, country, Cajun, old rock ‘n’ roll, jazz and bluegrass into a musical Americana that is both fresh and timeless.” Like the Grateful Dead and Allman Brothers before it, it has a tendency to jam, something that will undoubtedly be on display tonight at the Music Box where it'll pay tribute to the Grateful Dead. The show will feature Paul Perme of the Gila Monsters, Mike Miller of Vibe and Direct, and members of Jerry’s Little Band. (Niesel), 8 p.m., $15. Music Box Supper Club.

With more-than-earnest songwriting, mid-song breakdowns, and sing-a-long choruses, Signals Midwest, a band that formed in Cleveland in 2008, has contributed to the indie-punk/emo revival of the last few years. Over the past couple of years, the band has crafted a more mature sound and introduced more complex pop hooks and punk melodies. Even though the band still books its own shows, its growing popularity suggests a much bigger following could be on the horizon. Tonight's show serves as a release party for its new album, Pin. (Johnny Cook), 8 p.m., $10 ADV, $12 DOS. Now That's Class.