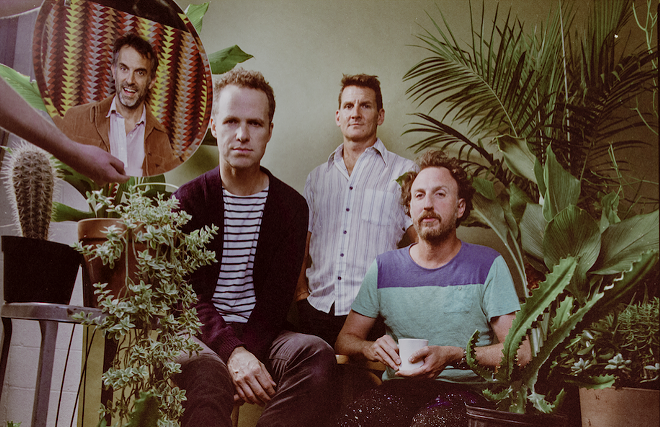 While often lumped in with the late-'90s alt-rock scene (thanks to breakout hit “Fa Fa”), Guster has actually spent most of its career firmly entrenched in the far more amorphous post-Y2K indie world. With 2015’s Evermotion, the band stretches its legs even further, drifting away from more straightforward rock riffs and into open-air chord progressions and, as at least one song titles hints, lazy, loving songwriting. The same can be said about the recent Look Alive, which came out earlier this year. (Eric Sandy), 8 p.m., $26 ADV, $31 DOS.  House of Blues.

Famous for delivering one of the top-selling debut albums of all-time, the pop-rock act Hootie & the Blowfish reunited last year and announced the dates of its anticipated Group Therapy Tour with support from special guests Barenaked Ladies. Mark Bryan, Dean Felber, Darius Rucker and Jim “Soni” Sonefeld first formed Hootie years ago when they were students at the University of South Carolina. They had a hit right out of the gates with 1994's Cracked Rear View, and frontman Rucker has also had a successful solo career so expect to hear a song or two from his solo career too. (Jeff Niesel), 7:30 p.m., $29.50-$129.50. Blossom.

Singer-guitarist Lindsey Jordan formed the indie slowcore band Snail Mail when she was just 16. The group has slowly picked up steam. In the wake of the Liz Phair-meets-the Breeders EP Habit, Jordan inked a deal with Matador Records and issued Lush last year, building on the momentum she built with her new EP. At tonight’s show, you can expect to hear songs such as the droning “Thinning” and whatever new songs Jordan feels like playing. (Niesel), 8 p.m., $16 ADV, $18 DOS. Beachland Ballroom.

Just over 30 years ago, the four original members of Blues Traveler, who have known each other since their early teens, gathered in the basement of their drummer’s parents’ Princeton, home and launched a jam band that has now recorded a total of 13 studio albums, four of which have gone gold, three platinum and one six-times platinum. Thirty years into its career, the jam band moe. has delivered 11 studio albums and a slew of live releases under its belt. The band has shared the stage with a wide range of acts, including Allman Brothers, the Who and Robert Plant. For the first time ever, the two bands have embarked on a co-headlining tour that comes to Nautica tonight. Expect each band to play a lengthy set and then collaborate on a 45-minute jam with opener G. Love. (Niesel), 5:30 p.m., $25-$59.50. Jacobs Pavilion.

Air Supply's pop ballad "Lost in Love" had been a hit in Australia in 1978 and began to break in America in 1980. Legendary record maestro Clive Davis had heard the Australian version and got in touch with the band's record company without the band being aware of it to license the track for other markets. Davis made a few slight modifications, adding additional female background vocals, but the resulting hit was very close to the original version. The success sustained the band's career, and it's still going strong fortysomething years later. (Matt Wardlaw), 7 p.m., $30-$75 ADV/$33-$78 DOS. Cain Park.