6 Concerts to Catch This Weekend 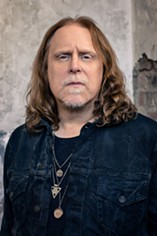 When we spoke with singer-guitarist Warren Haynes back in 2013 to preview his appearance in town with Gov’t Mule, the jam band he fronts, he admitted he had a wealth of ideas he'd like to try out the next time he was in the studio. At the time, he said he wanted to make a record more centered around acoustic instruments and more of a singer-songwriter record. Just last year, he finally got around to making Ashes & Dust, the singer-songwriter album he said he hoped to make. It’s a terrific collection of folk and bluegrass-y tunes that show off his songwriting abilities. Unlike any other project in his decades-long career, the album shows Haynes range as a musician. 7 p.m., $27.50 ADV, $30 DOS. House of Blues.

When it came time to record his latest effort, Imaginary Man, which he recorded with producer Eric Masse at his the Casino studio, singer-songwriter Rayland Baxter decided he didn’t want to be pushed “into the corner of singer-songwriter American band.” So he tried to emphasize the funky side of his sound. A song such as “Mr. Rodriguez” features some fuzzy guitar tones and cooing backing vocals. It’s a tribute to  Detroit-based singer-songwriter Sixto Rodriguez, the subject of Searching for Sugarman. Expect to hear it alongside a slew of the album's tunes at tonight's show. (Niesel), 8:30 p.m., $12 ADV, $14 DOS. Beachland Tavern.

Founded in Cleveland, the Imagine Foundation aims to spread awareness about child slavery, a problem in the U.S. and throughout the world. The organization aims to “equip and empower” individuals who can help bring modern-day slavery to an end. Tonight at 8:30 at the Maple Grove in Maple Heights, local bands Mossom, Silver Dollar Gunmen, Ricky Pony and Listen, Little Man play the Cleveland Freedom Festival, a benefit concert for the Imagine Foundation. Tickets are $5. (Niesel). Maple Grove.

Straddling the line between the more traditional jam band ethos and the burgeoning world of electronic dance music, Lotus finds itself in a unique position with respect to its fan bases: They’re introducing one side to the other, and the blend has proven to be pretty effective. By now, Lotus leans heavily toward the latter on most nights — and albums like Gilded Age demonstrate an interest in synths and loops far more than earlier outings like the excellent Escaping Sargasso Sea live album did. "It's hard to ignore the rise of EDM in the U.S. and how that's really changed the festival scene. We're definitely between those two worlds in some ways," bassist Jesse Miller told us a while back. However you slice it, these guys treat Cleveland very well. (Sandy), 7 p.m., $22 ADV, $25 DOS. House of Blues.

An Akron-based folk/rock/blues band, the Ohio Weather Band will play a CD Release Party at 8 p.m. on Saturday, Feb. 27, at Musica in Akron to celebrate the release of its second album, Crooked Light. Sounding a bit like something from indie pop greats Weezer, the album’s catchy first single, “Boardwalk Act,” features upper-register vocals and a touch of piano before grunge-y guitars kick in. In the wake of the CD Release Show, the band will play the South by Southwest music festival in Austin as part of a two-week tour. (Niesel), 8 p.m., $10. Musica.

A Tribute to David Bowie by Burnt Sugar Arkestra

In the wake of rocker David Bowie's death, the folks at the Music Box Supper Club wanted to find a unique way to pay homage to "one of the most iconic rock stars of all time." Founded in 1999 by writer and artist Greg "Ionman" Tate, Burnt Sugar Arkestra came to mind as "a group of players that can do justice to Bowie’s wide spectrum of musical grooves and his sense of the exotic." The Burnt Sugar Arkestra can cover the wide range of music for which Bowie was known. Rolling Stone's David Fricke calls them “a multiracial jam army that freestyles with cool telekinesis.” That's high praise coming from one of rock's best critics. (Niesel), 8 p.m., $18 ADV, $20 DOS. Music Box Supper Club.