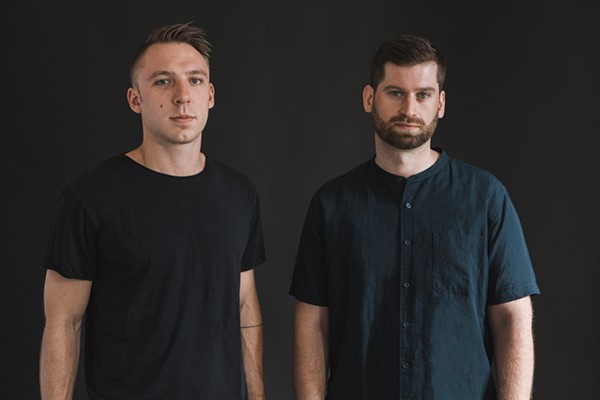 The electronic dance music act Odesza took a different approach when it began recording its most recent album, last year’s A Moment Apart. It focused on being cinematic and capturing orchestral moments with organic sounds. The album opens with a snippet of dialogue from the sci-fi flick Another Earth that effectively sets the tone for the chilled-out tunes. Guest singer Naomi Wild turns in a particularly soulful vocal performance on "Higher Ground," a hypnotic tune featuring crooning vocals and rattling percussion. A song that begins with trumpet blasts, “Everything at Your Feet” has a real jazzy feel to it even if shimmering synthesizers ultimately dominate the mix. Indie rock singer-songwriter Regina Spektor adds her touch to “Just a Memory,” a dreamy tune with orchestral flourishes. The band promises the upcoming Cleveland show, the first of summer’s outdoor concert season, will be “very visually based.” (Jeff Niesel) 7:30 p.m. Jacobs Pavilion.

Chuck Auerbach was always a bit of a “rocker dad” to his singer-guitarist son, Dan Auerbach, encouraging him to write original music and devote his life to music. The emotional investment paid off. A former Akronite, Dan Auerbach has gone on to win numerous awards as a producer and solo artist and as a member of the Black Keys. Two years ago, Chuck Auerbach, who lives in Akron, decided to launch his own musical career and played his first show. He also recently performed at the South by Southwest music festival where he played his original tunes with a little help from a five-piece band. Auerbach brings that band, which includes Russ Flannigan on keyboards, Kevin Martinez on upright and electric bass, Danny Tommy Jenkins on percussion, Cathy Grady on violin, viola, guitar and vocals, and Michael Grady on guitar, harmonica and vocals, to the Beachland Tavern tonight. The group will release its debut, which Dan Auerbach produced, later this year on Father's Day. (Niesel), 8 p.m., $10 ADV, $12 DOS. Beachland Tavern.

Like other RuPaul's Drag Race alum, singer Trixie Mattel capitalized on her time on the show (initially on season seven, then on All Stars) with an album release. But she went a different route. While most drag music leans toward dance/club music, Mattel’s first album, Two Birds, draws from her love of classic country and folk. Two Birds is made up of a succinct six tracks, meant to mimic the songs of old country radio Mattel grew up around. It's a product of the time she spent, as if her life was the first verse of a country song, being taught the basics of guitar by her grandfather in the middle of America. The success of Two Birds was enough to convince Mattel to create its follow-up, One Stone, released last March, timed perfectly to coincide with the night she won All Stars. While the first album was made up of what Mattel calls "melodramatic breakup songs," One Stone finds the artist casting out further into her expanding musical universe.  Expect to hear songs from both albums at tonight's show. (Michael Wu) 8 p.m., $40.50 ADV, $45.50. House of Blues.

The Dream Syndicate always took from a broader, more ambitious palette of influences than many of its peers. The set the band played in town a few years back touched on bar-band blues (“50 In A 25 Zone”), slinky cabaret jazz (“Until Lately”), careening punk (“Then She Remembers,” which singer Steve Wynn by saying, “We played some punk rock at Peabody’s back in the day”) and twanging post-punk (“Definitely Clean”). Wynn sounded even more like Lou Reed than usual, especially on the spiraling “Tell Me When It’s Over”; his elongated vocal cadences and drawling enunciation made the song feel like a lost Velvet Underground classic. Expect something similar when the band returns to the Beachland tonight. (Annie Zaleski) 8:30 p.m., $20. Beachland Ballroom.

To stand out in a sea of singer-songwriter wannabes and to be a trailblazer in the genre, a person's vocals must sound wholly organic. In Iris DeMent's tone, there's screeching and wildness but also a purity. She always tried to emulate her mother's voice and also the preacher's wife from her hometown church. When she sits at the piano, she says she does her best to let "something ancient and spirit-filled come through [her] and move around the music." Expect her to tap into those emotions for tonight's show. (Laura Morrison), 7:30 p.m., $35 ADV, $40 DOS. Music Box Supper Club.

Local rapper Toobe Fresco says "there's high energy, excitement and soul" in his live show, and we believe the guy. Musically, Fresco does it all — he writes, he produces, he engineers. He looks to some of the titans of music and surprisingly one newcomer as sources of motivation. Fresco's new album, Never Better, is due to be released shortly, and he promises an abundance of truth, soul and encouragement. Expect to hear tracks from it at tonight's show. (Emanuel Wallace), 8 p.m., $10. Grog Shop.

In the past, "In Celebration Of, A Tribute To" events have paid tribute to local musicians such as Michael Stanley, Carlos Jones and Alex Bevan. Tonight, the concert organizers turn their attention to Beachland co-owner Cindy Barber. An advocate for both unheralded and heralded local and national acts, Barber regularly champions quality musical acts of all genres. Truly knowledgable, she's one of the city's musical tastemakers. A slew of great local acts share the bill tonight as they pay tribute to her. (Niesel) 8 p.m., $20. Beachland Ballroom.