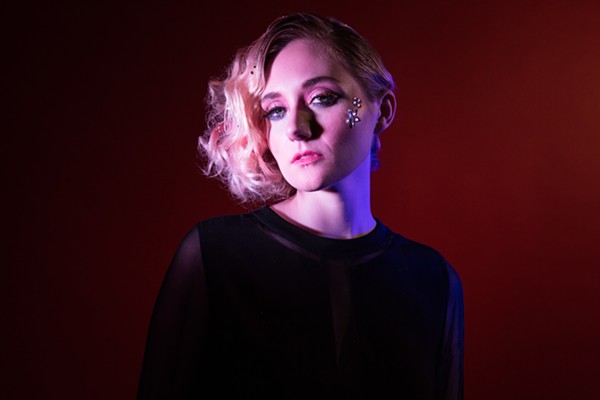 Growing up playing in her parents’ bluegrass band alongside her brother David, a wonderful singer-songwriter in his own right, Jessica Lea Mayfield has been making music on stage essentially since she can remember. Her teenage years were full of sketchy shows and also last-minute opener gigs, including at the Beachland, just trying to be heard. Eventually, she started making music with Dan Auerbach and later the Avett Brothers. Her 2010 single, “Our Hearts Are Wrong” garnered serious play on college rock stations across the country. Critics and fans alike took notice of her sparse, rock vibe and melancholic vocals. Mayfield has had a tough year, but she's currently working on a bunch of projects she’s not at liberty to discuss yet. She loves the holidays and has said that tonight's Beachland show may be more Christmas-tinged than anticipated. (Laura Morrison) 8 p.m., $18. Beachland Ballroom.

Born in Cleveland, guitarist and producer Bob Frank has lived in Northeast Ohio his whole life. He was working as a radio salesman but quickly realized "that was not what I wanted to do." After that didn't pan out, he became the musical director for a local play. In the wake of that, Frank formed the Hotfoot Quartet and then played in a reggae band for about four years before joining the local swing/jump blues act Blue Lunch in 1995. Frank has also played with local heroes such as Robert Lockwood Jr., Wallace Coleman, Howard Armstrong and British bluesman John Baldry. His solo debut, True Stories and Outrageous Lies, features 11 originals as well as a cover of the traditional tune "Stavin' Chain." Standouts on the album include the twangy "Married Woman Blues" and the boisterous "Lucky So Far." Tonight's show celebrates its release. (Niesel) 7:30 p.m., $15. Bop Stop.

In 2003, singer-songwriter Chris Allen, his sister Molly and singer-guitarist Doug McKean worked up four original Christmas tunes and then threw a big Christmas party to which they invited their musician friends. They played the four original tunes they had penned as well as a few covers, recorded them and delivered them on a CD to their families as a Christmas gift. That signaled the birth of the Ohio City Singers; the band now plays several Christmas-themed concerts each year. Any Clevelander owes it to him or herself to at least catch one of these gigs. (Niesel) 8 p.m., $18 ADV, $20 DOS. House of Blues.

Michael Stanley & the Resonators/Donnie Iris and the Cruisers

Despite his recent health issues, local singer-guitarist Michael Stanley continues to be productive. He's put out an album a year for the past six years, self-releasing the discs through his own Line Level label. Expect to hear MSB favs as well as a good sampling of Stanley’s solo material tonight at a show that pairs him with singer-guitarist Donnie Iris, another Midwestern rocker who's become a legacy act and still draws well in Northeast Ohio. (Niesel), 8 p.m., $48.50-$75. Hard Rock Rocksino.

Boys from the County Hell/Mary's Lane

When the Boys From the County Hell first got together in 2000 at the now-shuttered Euclid Tavern as a Pogues cover band, it was supposed to be just a one-night stand. But after selling out that first show, the band continued from there. Now, every St. Patrick's Day, the Boys play marathon shows, often starting before 10 a.m. and not stopping until the bars close. One year, they teamed up with Spider Stacy, an original Pogue, for a series of shows. Another year, they had a residency in Las Vegas. They've even played a gig in Bangkok. A few years ago, they added a Christmas concert to the mix. Expect this gig to be a rowdy good time. (Niesel) 8 p.m., $18 ADV, $2 DOS. House of Blues.

Local garage rockers the Alarm Clocks existed for close to three short years in the ’60s before calling it quits after releasing only one single. And yet, it left such a lasting impression, that it would reunite 13 years ago to start recording and touring again. The band recorded its first (and until recently only) single "Yeah!"/"No Reason to Complain" live in the studio in 1966, and some 300 copies were made (the original pressings have since become collectors' items that sell for up to $1,000). With its lyrics about cruising for women and walking down the streets on a Saturday afternoon, "Yeah!" isn't particularly sophisticated when it comes to the lyrics. The same goes for "No Reason to Complain," another song about looking for quick and easy love. Yet the rawness — characterized by Mike Pierce's high-pitched yells and Boehm's abrasive guitar — is distinctive. Both tracks have become iconic. Expect to hear them tonight when the group performs a rare live concert. (Niesel), 8:30 p.m., $8 ADV, $10 DOS. Beachland Tavern.

The first time the guys in the local hip-hop outfit Muamin Collective put on a holiday show, they simply intended to "do something big for when people come home," as the guys told us a few years a back. They hosted their first show and it turned out great. They've kept doing every year since. This year's lineup features an eclectic group of locals, including Revolution Brass Band, Stoke, Populi and DJ Candi Fresca. (Niesel), 8:30 p.m., $10. Grog Shop.