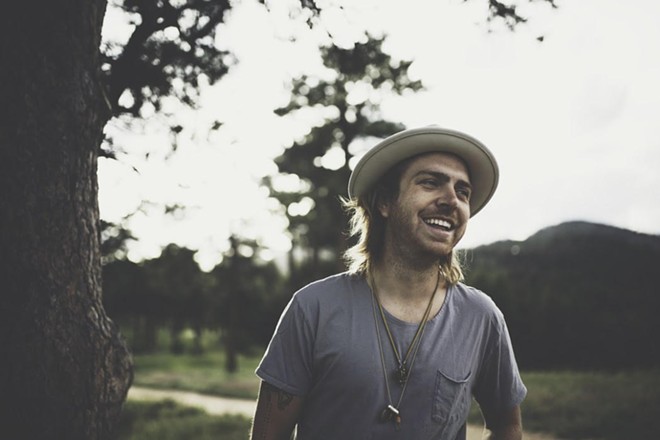 An indie singer-songwriter who got his start nearly 20 years, ago, Trevor Hall has been pretty prolific over the course of his career. In 2015, he followed 2014's Chapter of the Forest up with KALA, a terrific album opens with the somber, semi-acoustic tunes such as "To Zion" and "All in Due Time." The piano ballad "Forgive" and the shuffling "Uncle Jo" both show off Hall's husky voice and manage to have a quiet intensity to them. He returned in 2017 with The Fruitful Darkness, adding another terrific release to his ever-expanding repertoire. (Jeff Niesel), 7:15 p.m., $25 ADV, $30 DOS. Agora Theatre.

Jukebox the Ghost + The Mowgli's/Twin XL

Jukebox the Ghost’s eponymous album — an excellent starting point for the uninitiated — begins with gentle synth droning over a snapping snare beat and singer Ben Thornewill crooning a reflective verse. Then the guitars, the keys, the bass drum, everything kicks into a higher, poppier gear — the band's joyous default setting, as it were. Hook-laden and catchier than hell it’s a undeniable kaleidoscopic hit. The title? "Sound of a Broken Heart," which reveals a good deal about the album and the band. Their live show sets this stuff in technicolor glory; every time we’ve seen them in Cleveland has been a terrifically fun time. Tourmates the Mowgli’s also possess keen pop sensibilities, making this a terrific double bill. (Eric Sandy) 8 p.m., $22 ADV, $25 DOS. Beachland Ballroom.

Based out of Baltimore, Pigeons Playing Ping Pong have steadily garnered an exciting renown as they tour the region. Let year's Pizazz builds off of 2016's Pleasure, which builds from 2014's Psychology and the band's original Funk EP, serving up funky instrumentation with swagger-laden lyrics and confidence. Much of their material alternates between blissed-out groovin’ and, y’know, in-your-face arpeggiating and wanton funk throw downs. The music is kind to all, so come to the show expecting to be welcomed into the band’s tight-knit community. Songs like “F.U.” guarantee a bustling dancefloor, what with theit tendency for tongue-in-cheek humor and shred-tastic solos. “Zydeko” flirts with its namesake musical tradition, while remaining close to the funk pocket that these guys are known for. Among the East Coast, third-tier jam bands (or however you want to classify the scene), these guys are absolutely worth watching closely. (Sandy), 9 p.m., $22-$30. House of Blues.

Written over the course of 2017 in a church in remote rural Ontario, TPC, the latest effort from indie rockers Tokyo Police Club, marks a fresh beginning for the band. One album highlight, “Hercules,” has a great, Strokes-like feel to it thanks to its snotty vocals and infectious guitar hook. A departure from the band's typical approach, “Simple Dude” starts with a bit of spoken word before emerging into something that sounds like a cross between Smashing Pumpkins and the Dream Syndicate. Expect to hear a good mix of old and new tunes at tonight's show. (Niesel) 9 p.m., $16 ADV, $18 DOS. Grog Shop.

Over the course of a career that stretches back to the ’60s when he played with the surf spoof act King Arthur & the Charlottes — a group known for its one and only single, “Schwinn 24/Beach Party Boo Boo” — Kinky Friedman has made quite a name for himself. He's toured with Dylan’s Rolling Thunder Revue, recorded with Eric Clapton, appeared on Saturday Night Live and played at the Grand Ole Opry. Friedman has also written a slew of detective novels and once ran for governor of Texas. And, oh yeah, he wrote a song that became the tune that the late Nelson Mandela counted as one of his favorites. Tonight's show will offer a mix of spoken word and music by one of America's truly great treasures. (Niesel), 8 p.m., $22-$40. Beachland Tavern.

Singer-songwriter Paul Thorn had his first brush with fame when he sang the Lionel Ritchie tune “Three Times a Lady” at a talent show when he was in grade school. He suddenly went from being a social outcast to the most popular kid on the playground.  Thorn tried his hand at a few different things before becoming a full-time singer-songwriter. He was even a pro boxer at one point and fought world champ Roberto Duran. But his 1997 debut Hammer and Nail established him as a singular talent, thanks in part to his woozy, bluesy voice. The guy's a consummate showman and a real character. (Niesel) 8 p.m., $28 ADV, $35 DOS. Music Box Supper Club.

In a press release about this show, local rapper Vice Souletric promises that “the Nu 90s Experience is more than a show.” Rather, he promises that it’ll be a party celebrating “all the elements of the genre” as he and DJ NuEra bridge the gap between the golden era of rap music and today’s new stars. Part of a small tour, tonight’s show is one of eight stops for the duo. (Niesel) 8:30 p.m., $10 ADV, $12 DOS. Grog Shop.