7 Concerts to Catch This Weekend in Cleveland 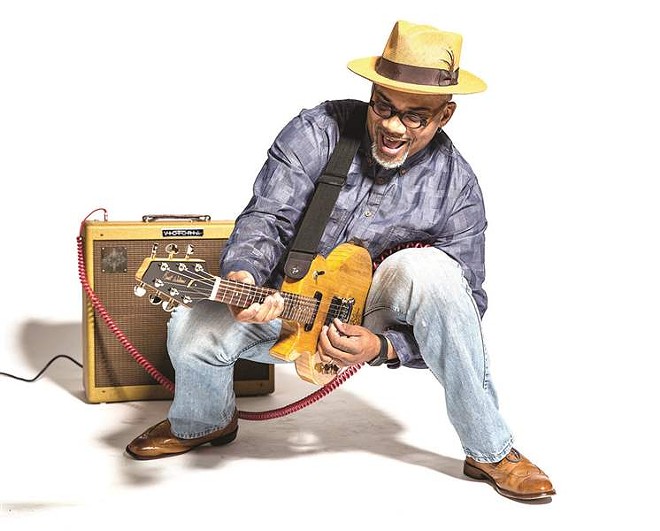 On the hard-driving “Strength to Survive,” one of many highlights on singer-guitarist Toronzo Cannon’s latest album, The Chicago Way, Cannon sings about how “real life” is getting in the way of his dreams. He describes himself as a “broken man” who can’t look at himself in the mirror. It’s heavy, emotional stuff, and the riveting guitar solos possess a real weight too from the Chicago city bus driver who’s become the latest highly rated blues export from the Windy City. (Jeff Niesel), 8 p.m., $15 ADV, $18 DOS. Music Box Supper Club.

Earlier this year, the South Africa-based hip-hop duo Die Antwoord announced a world tour in support of its final album, The Book of Zef, which is due out next month. Multi-talented rappers Ninja and Yolandi Visser possess a good deal of charisma and even appeared in the Neill Blomkamp film Chappie. The visually oriented group derives its outlandish image from a South African counterculture movement known as Zef. Expect tonight's show to come off as performance art. (Niesel), 8 p.m., $41.75-$62.75. Jacobs Pavilion.

Since breaking out in 2012 with the smash hit “Cruise,” the country act Florida Georgia Line has received all kinds of awards and previous releases, Here’s to the Good Times and Anything Goes, have gone platinum. The soulful piano ballad “H.O.L.Y.,” the lead single form the band’s latest album, last year's Dig Your Roots, topped the Billboard Hot Country Songs chart for 17 weeks upon its release, turning the album into another major hit for the duo. And yes, you read that right, rapper Nelly joins the group on tonight's bill. The connection? Florida Georgia Line had a cameo on his latest album. (Jeff Niesel), 7 p.m., $45-$88. Blossom.

Bluesman Kenny Wayne Shepherd and co-producer Marshall Altman (Matt Nathanson, Natasha Bedingfield, Kate Voegele), recorded Shepherd's new album, Lay It On Down, at Echophone Studios in Shepherd’s hometown of Shreveport. Shepherd largely recorded the album live in the studio to analog tape with his band, which features long-time singer Noah Hunt, drummer Chris Layton, bassist Kevin McCormick and keyboardist Jimmy McGorman. The album's opening track, “Baby Got Gone,” has a great hook. A meaty guitar riff kicks off the song and Shepherd delivers a piercing solo early in the track too. Bursts of horns and organ combine to give the rollicking “Diamonds & Gold” a retro feel. Expect to hear these tracks and more at tonight's show. (Niesel) 8 p.m., $32.50-$145. Hard Rock Rocksino Northfield Park.

Weezer cover band, the Pinkertones come to town tonight to play classic hits from The Blue Album and Pinkerton. They'll also play other songs from that era. Singer-guitarist Phil Cogley does his absolute best to make Weezer singer Rivers Cuomo proud. With many cover bands, you already know what to expect, but the Pinkertones have fun with the crowd and perform every show with real energy. (Adrian Leuthauser), 9 p.m., $7 ADV, $10 DOS. Mahall's 20 Lanes.

Playing a few years ago at House of Blues, singer-guitarist Chris Isaak demonstrated the degree to which he’s become a showman, something that was only amplified by the crowd-pleasing covers he chose to include. Isaak’s terrific voice showed no signs of wear as he evoked Roy Orbison on the rockabilly number “Blue Hotel” and then offered up some old-time R&B with “All I Want is Your Love.” While Isaak’s biggest hits, “Somebody’s Crying” and “Wicked Game,” came off as a bit perfunctory, Isaak picked up the tempo again for “Best I Ever Had,” an upbeat, poppy number. And he really vamped during the fun “Baby did a Bad, Bad Thing,” another one of his most recognizable tunes. Expect to hear these tracks when he returns to town tonight. (Niesel) 8 p.m., $65-$75. The Kent Stage.

Florida natives Wage War come back to Ohio for the second time this year. The Deadweight Tour Part 1 is in support of Wage War's recently released album, Deadweight. Their first single "Stitch" opens with singer Briton Bond intensely whispering, "Leave me in the dark with a hole for a heart, as low as I can get, burn the bridge, rip the stitch out." But on the second single "Don't Let Me Fade Away," the band shows it can be uniquely melodic as well. Singer-guitarist Cody Quistad sings smoothly but with just as much intensity as Bond.  (Leuthauser). 7 p.m., $13 ADV, $15 DOS. The Foundry.