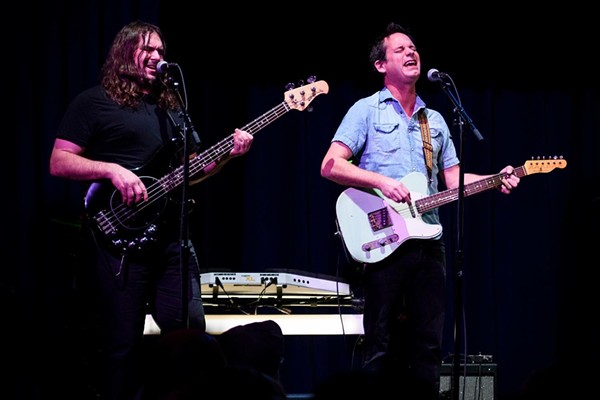 A Tribute to Rock ‘n Roll Hall of Fame Inductees Past & Present! with Chris Allen and Friends (in the Supper Club)

The late Jim Konya (Nunslaughter, Schnauzer, Gravewurm) played drums in many local bands over the years and was an iconic figure in the underground Cleveland heavy metal scene. Konya passed away in 21014 at the age of 44 after suffering two strokes. In the wake of his passing, local metal acts launched Konyafest as a way to pay tribute to the man. The third incarnation of the event features local acts such as Escalation Anger, ESTUARY, Kurnugia, Shed the Skin and Crossface. (Niesel), 7 p.m., $10. Agora Ballroom.

The Darkness began at the turn of the century with guitarist Dan Hawkins and his brother Justin, the man behind the magnificent vocals, bassist Frankie Poullain and drummer Ed Graham (later replaced by Rufus Tiger Taylor). Inspired by the glam rock acts of the 1970s, in music and clothing (hello, bell-bottoms), the group played as many gigs as possible. Its outrageous antics and tight, electric tunes landed them a record deal, leading to 2003’s epic Permission to Land. At that point, it was as if the sun would never set. But then, Poullain left, their sophomore record, well, slumped, and soon Justin left for rehab never to return. These were the dark years when Hawkins formed his own band, Stone Gods. But the Darkness couldn’t stay away from one another — it helps when two of the members are siblings. Fans heard rumblings of a reunion tour with the original members in 2011, and the act hasn’t slowed since. (Laura Morrison) 7 p.m., $25 ADV, $30 DOS. The Agora Theatre.

A terrific hip-hop act, the Roots formed some 30 years in Philadelphia and made a notable debut with 1993's Organix. In the wake of that release, the group went on to great fame and signed a major label record deal. It also became the house band for Late Night With Jimmy Fallon. Drummer Questlove has become a celebrity in and of himself. An adjunct instructor at the Clive Davis Institute of Recorded Music at New York University, Questlove is well-versed in the history of hip-hop, soul and R&B. Expect him to play music from all these genres tonight when he DJs the official afterparty for the Rock Hall Inductions.   11 p.m., $30 ADV, $35 DOS. House of Blues.

Singer-songwriter Anderson East’s 2015 album Delilah, which came out to widespread acclaim on Low Country Sound/Elektra Records has the distinction of being the first release on a new imprint run by uber producer Dave Cobb. The retro-sounding album opener “Only You” features cooing backing vocals and a lively horn arrangement as East belts out the chorus, “I’ve been waiting so long.” The album’s single, “Satisfy Me,” sounds like a classic cut during the ’60s. East returned earlier this year with the equally soulful Encore. Expect to hear songs from it at tonight's sold out show. (Niesel) 8 p.m. Beachland Ballroom.

The brain child of Japanese guitar wiz Makoto Kawabata, a guy that Wire magazine describes as "one of the greatest post-Hendrix blood and fire guitarists," Acid Mothers Temple has created mind-melting psychedelic rock for the past 20 years now. The discography includes too many LPs and Eps to mention. At the end of last year, the group dropped Those Who Came Never Before and Wandering the Outer Space, two albums that distill its myriad of influences that range from Black Sabbath to Kraftwerk. (Niesel) 8:30 p.m., $15. Grog Shop.

Originally, the hard rock act L7 inked a deal with Epitaph, the punk imprint run by Bad Religion’s Brett Gurewitz and issued its self-titled debut in 1988, recording the album in Gurewitz’s small office studio. The band would leave Epitaph for Sub Pop and then sign with a major label that helped it deliver a couple of hits in the ‘90s. When it got dropped, the band broke up but since reuniting a couple of years ago, it has cut two new songs. With its distorted guitars and double-time drums, “Dispatch from Mar-A-Lago” has a real intensity to it that suggests the band hasn’t lost a step. Much like “Pretend We’re Dead,” “I Came Back to Bitch” features a catchy riff and sardonic vocals as Sparks sounds a bit like former Dead Kennedys singer Jello Biafra as she squeals, “I came back to bitch.” Expect to hear both tracks at tonight’s sold out show. 8:30 p.m., $25. Beachland Ballroom.

In 2016, UK emo band Moose Blood signed to Hopeless Records, which houses heavyweights like Taking Back Sunday, Yellowcard and New Found Glory — but fans are a little concerned that the major label is going to mess with the band’s sound too much. The band’s 2016 album, Blush, should assuage any doubts from fans, as Moose Blood sticks to its guns and delivers on the promise that critics saw when comparing the band to Brand New and the Get Up Kids. Moose Blood doesn’t change the formula too much from other emo bands — the big hooks, catchy choruses, and confessional lyrics are all present, but Moose Blood does them just as well as anyone else. The current tour promotes the band's latest effort, I Don't Think I Can Do This Anymore. (Johnny Wood), 7 p.m., $20.52 ADV, $24.84 DOS. Agora Ballroom.