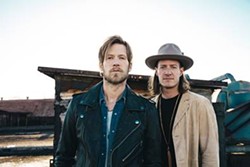 Since breaking out in 2012 with the smash hit “Cruise,” the country act Florida Georgia Line has received all kinds of awards and previous releases, Here’s to the Good Times and Anything Goes, have gone platinum. Currently, the soulful piano ballad “H.O.L.Y.,” the lead single form the band’s new album Dig Your Roots, has topped the Billboard Hot Country Songs chart for 17 weeks. (Jeff Niesel)
7 p.m., $31-$65.75. Blossom.

Above This Fire Vinyl Release Party

Toronzo Cannon (in the Supper Club)

On the hard-driving “Strength to Survive,” one of many highlights on singer-guitarist Toronzo Cannon’s latest album, The Chicago Way, Cannon sings about how “real life” is getting in the way of his dreams. He describes himself as a “broken man” who can’t look at himself in the mirror. It’s heavy, emotional stuff, and the riveting guitar solos possess a real weight too from the Chicago City Bus Driver who’s became the latest highly rated blues export from the Windy City. (Niesel) 8 p.m., $15. Music Box Supper Club.

The past year or so has brought something of a turning point for Rich Robinson's career. His journey has always been one of waves — ebbing, flowing, expanding — but recent developments have seen him stretching his musical muscles in more ways than ever before. Earlier this year, Robinson and his band dropped Flux, another robust notch in his dynamic trip. It's a full-bodied album, clocking it neatly at an hour and seeing Robinson blend the legacies of his solo career and his time with the Black Crowes. (Eric Sandy) 8:30 p.m., $20.50 ADV, $25 DOS. Beachland Ballroom.

In the early '80s, Slayer and Anthrax took elements of punk rock and heavy metal to form thrash metal, a new genre. Despite the tragic loss of founding guitarist Jeff Hanneman, Slayer has soldiered on with guitarist Gary Holt, who adds some vicious guitar work to the band’s latest album, Repentless. And despite various lineup changes, Anthrax continues to tour and record. The band recently released a new studio album, For All Kings. In separate phone interviews, Slayer guitarist Kerry King and Anthrax guitarist Scott Ian provided some perspective on just how the once-underground bands have managed to persevere. Thirty-five years on, Slayer and Anthrax, who kick off a fall tour tonight at Jacobs Pavilion at Nautica, are still going strong. (Niesel) 6:30 p.m., $29.50-$49.50. Jacobs Pavilion.

Founded in 1999 by writer and artist Greg "Ionman" Tate, Burnt Sugar Arkestra dabbles in a wide spectrum of musical grooves and has a keen sense of the exotic. Rolling Stone's David Fricke calls them “a multiracial jam army that freestyles with cool telekinesis.” That's high praise coming from one of rock's best critics. The group makes its Bop Stop debut tonight. (Niesel), 8 p.m., $15. Bop Stop.

Singer-songwriter Hal Walker's music comes from a long line of troubadours that stretches all the way back to James Taylor, Bob Dylan, and all those guys with beat-up acoustic guitars who busked the streets for spare change. A staple on the local folk scene, Walker had a near-death experience in 2013 when he and three friends were walking on the beach and a giant wave took him out to sea. Walker survived. One of his friends didn’t. The trauma inspired Life Wonderful, Walker’s latest album. He dedicates the album to his father, the Rev. Harold Walker Jr. who is currently in hospice with Non-Hodgkin Lymphoma. (Niesel), 7:30 p.m., $5-$10. The Kent Stage.

Riding a pretty smooth 10-year ascent to relative acclaim in the U.S. and Canada, the Sheepdogs drifted into their latest album — last year’s Future Nostalgia — with confidence and finely honed songwriting chops. You’ve got examples of upbeat riff heaven, like “I Really Wanna Be Your Man” and “Back Down,” slathered across the album. It’s fun as hell, and this is how rock ‘n’ roll should sound: full-bodied and red-blooded. Pat Carney of the Black Keys produced the Sheepdogs’ prior album, and that’ll give you a pretty good sense of where this band is coming from. (Sandy), 8:30 p.m., $15 ADV, $17 DOS. Grog Shop.