9 Concerts to Catch This Weekend 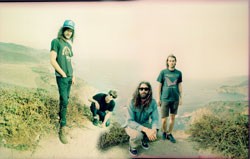 All Them Witches
Taking the various umbrellas of “psychedelic rock” and “stoner rock” and stretching them as far as they want to, All Them Witches has been breathing long-needed life into musical scenes that left their heyday in the ashtray a while ago. The band’s new album, Dying Surfer Meets His Maker (our favorite album title of the year, by the way), kicks around all the requisite strains: the chugging, hazy instrumental “El Centro,” creekside meditations on guitar (“Mellowing”), desert-at-sunset finger-picking melodies (“Call Me Star”), etc. The band does a good job on this album of keeping things fresh and throwing down new sounds around every bend in the river. (Eric Sandy), 8:30 p.m., $10 ADV, $12 DOS. Beachland Tavern.

Released in 2013, the Rumpke Mountain Boys' Moon is a great album. The strings are top notch as always, and the attitude is fresh and laid back. “Cincinnati Moon” is a nice little song, cleaving the Ohio River duality of north and south. From down in Southwest Ohio up here to the Northeast, the band’s got a lot of good to deliver. Their shows promise high-energy bluegrass and plenty of dancing for those who’ve got the itch. Here’s a parting drop of Rumpke perspective: “Doin’ wrong feels as good as being right, especially when I’m high as a kite.” We couldn’t agree more. (Sandy) 8 p.m., $10-$15. The Kent Stage.

This recently reunited local band’s new album, Even Without Wings, has been a ten-year project. It marks a strong return to form. Singer Josh Stone says he wrote some of the songs, including the track “Vega Song,” which is about his daughter, ten years ago. The album opens with the shimmering “Find You,” a moody ballad that suggests the band’s strength revolves around delivering songs that start slow and finish strong. “Dirty” has a simmering intensity to it as does “To Dust For You,” a song that begins with a bit of gently strummed electric guitar before Stone starts crooning and the band cranks up the guitars. (Jeff Niesel) 8 p.m., $10 ADV, $13 DOS. Beachland Ballroom.

For their latest album, What I Did, Hey Mavis teamed-up with Yonder Mountain String Band guitarist Adam Aijala, Chuck Auerbach (co-writer of the Black Keys song "Hard Row"), singer-songwriter Brent Kirby and Don Dixon (REM, Smithereens, Mary Chapin Carpenter, Red Clay Ramblers). Kirby plays guitar on a couple of songs and co-wrote several of the tracks, and Auerbach has been supportive of Hey Mavis from the start. He showed up with a stack of lyrics and the band picked some they liked for the album's title track. The music draws from myriad musical genres, including jazz, bluegrass, old-timey, folk and rock. The new album has lots going for it. "Mon Bijou" is an elegant waltz that sounds like it was recorded during a different era, and the ballad "Hairbrush," a song that Kirby co-wrote, is a somber meditation on motherhood. Expect a high-energy show from these local favorites. (Niesel), 8 p.m., $10 ADV, $12 DOS. Music Box Supper Club.

Songwriters Justin Miller and Kurt Eyman started this band in the winter of last year when they began collaborating on songwriting duties. The two independently recorded the group's fine debut album, Into the Pines, at Miller's studio. On a song such "Indigo Kids," the band puts earnest vocals up front in the mix while presenting a balance of acoustic guitars, vintage sounding keyboards and piano. "Laniakea" features a vibrant violin riff courtesy of Molly Connolly. The song then concludes with a vigorous jam. The band explores its ambient impulses with "Klop," a track that includes percolating synthesizers. A few guest musicians came to the studio during the sessions to add strings. Expect to hear more orchestration in the future. (Niesel) 8:30 p.m., $5. Beachland Tavern.

Back in the '80s, the Sunset Strip produced any number of hair metal bands as clubs such as the Troubadour and Rainbow Bar and Grill were the proving grounds for rock acts such as Van Halen and Motley Crue. Those days are over but don't tell Steel Panther. The L.A. band pays tribute to that era on All You Can Eat. The album comes off as a hearty send-up to the era. "Pusswhipped" starts with acoustic guitars before the heavy guitars and shrieking vocals kick in "Party Like Tomorrow is the End of the World" draws equally from Def Leppard and Andrew W.K. (Niesel), 8 p.m., $27.50 ADV, $30 DOS. House of Blues.

An Acoustic Christmas with Over the Rhine

Cincinnati’s indie folk-rock act Over the Rhine first formed in 1989 and had a brief brush with stardom in the ’90s, when it signed to the I.R.S. imprint, the same label that launched the career of R.E.M. The band never broke through to the mainstream but it has delivered some solid albums and regularly plays Northeast Ohio, where it has a small but devote following. Its Christmas show is an annual tradition in these parts and will feature a mix of original tunes and covers. (Niesel), 7 p.m., $30 ADV, $35 DOS. Music Box Supper Club.

For tonight's annual Christmas extravaganza, Bill Rudman has put together a show of more than 30 songs, blending Christmas standards and novelties. The set list draws heavily on Great American Songbook composers like Irving Berlin and George Gershwin. In the past, Rudman has also included "A Jazz Christmas Carol," Jerome Kern’s 1917 ragtime version of "God Rest Ye Merry, Gentlemen." He's also likely to include a holiday song that George Gershwin composed at the age of 21 and a song that Rodgers and Hammerstein wrote in 1952. Yep, you can bring the grandparents to this gig. (Niesel), 7 p.m., $21-$45. Nighttown.