Wynton Marsalis and the Lincoln Center Jazz Orchestra pay tribute to the roots of jazz. 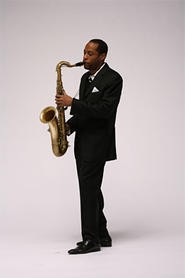 "One hundred and fifty years ago in old New Orleans, there was a public square called Congo Square. It was a dusty old place where on Sundays, when they did not have to work, the African slaves came with their drums to sing and dance what they called the bamboula," wrote Langston Hughes in his 1955 essay Old New Orleans, in which he traced the origins of jazz. "The rhythms that the drummers there beat out in the dusty sunlight made the people standing around want to move their heads in time, tap their feet, and dance too. That is one of the things about jazz: It always makes people want to move."

Congo Square is now the name of a composition written by New Orleans native Wynton Marsalis and Ghana-born master drummer Yacub Addy. "In every other place, the slaves couldn't get together. You could be punished for playing," explains Marsalis in a recent video promoting the duo's tribute to the legendary square. "Here, you'd play, and African rhythms and the traditions were celebrated. It is the place where the genesis of jazz as an idea came. Jazz, blues, funk, all kinds of pop, rock -- all things came because the drums were played in that area."

Marsalis has had a distinctive career as an arranger, bandleader, and jazz educator. Leading New York's Lincoln Center Jazz Orchestra, as well as his own septet, he has broken musical barriers while celebrating the roots of jazz through works like Congo Square.

The current version of this work, which premiered last year on the very site that it's named after, took Marsalis and Addy several months to finish. The piece begins with Ghana musicians from Odadaa!, a traditional African music ensemble. The group plays and sings to a frenetic drumbeat, and is later joined by the orchestra. Weaving together styles from both continents, the musicians lead listeners through a musical evolution of African American music, from African roots to gospel, blues, jazz, and swing. Contemporary sounds are even part of the journey, including an homage to the victims of Hurricane Katrina. "The significance that [Congo Square] has taken after Katrina is that the music is so life-affirming," says Marsalis.

"The [New Orleans] audience loved it," recalls Cleveland-born saxophonist Walter Blanding Jr., a full-time member of the orchestra. "Everywhere we've gone, we have had a wonderful reaction. You can see the love and respect from them, and it gives you a sense of togetherness. The experience of playing the piece has been fabulous. The shows have constantly been sold out, and you can see that the people want to get up and dance, and there's this wonderful interaction between the musicians and the audience."

Born in 1971 to a family of musicians, Blanding spent the first 10 years of his life on the East Side's 140th Street. When he was six years old, his father, who is a professional bass player, walked him to a music store and asked him to select an instrument. "I pointed to the violin, and he probably envisioned the pain that it is to have someone learning that kind of instrument in the house, and asked me to pick something else," he says, phoning from Brooklyn. "I chose the saxophone -- I guess because I liked the shape, and I haven't left it since."

Blanding's family relocated to New York in 1981, where he began playing professionally in his late teens. Throughout his career, he has performed with the likes of the late Cab Calloway, the Wynton Marsalis Septet, upright bass innovator Ron Carter, and fellow Cleveland saxophonist Joe Lovano, the son of local saxophonist Tony "Big T" Lovano. Blanding says he often returns to his city of birth to visit family.

Blanding explains that working under the direction of Marsalis is both a pleasure and a challenge. "He is able to pick the right people for each project. It's a do-or-die sensation. We play music hard, but we also enjoy ourselves. Wynton is a down-to-earth guy. We work together so much. He demands excellence, both on stage and during rehearsals.

"Jazz is based on improvisation, but I think the biggest challenge is adapting the different styles in Congo Square," he adds. "There is a lot of Afro-Cuban, African, and other functions, and bringing that together has been something very difficult to do."

Congo Square with the Lincoln Center Jazz Orchestra is a unique opportunity to actually learn history while listening to music. It appeals not only to jazz fans, but also to anyone who has an interest in the roots of American music. There won't be too many opportunities to catch it onstage, but according to Blanding, there is a CD in the works. However, with its strong visual element, this is the kind of performance to be heard live, not in the comfort of your living room.