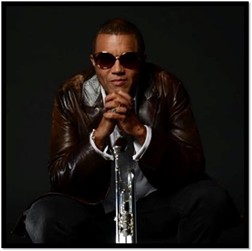 A founding member of the R&B group Impromp2, singer, songwriter, producer, trumpeter, arranger, music director and composer Johnny Britt has two No. 1 Billboard Contemporary Jazz Singles to his credit. He currently has a third tune that has been No. 1  on that chart for eight straight weeks.

A Cleveland native, Britt returns to town this weekend to perform at his alma mater, Cathedral Latin High School, which is celebrating its centennial.

“I remember being on summer vacation at my sister’s in Louisville when I got a call from my mother telling me that I have to come home I just put you in the Cathedral Latin High School Marching Band,” Britt says in a press release. “This is where it all changed for me. I was in the stage band, lab band, and the symphonic band, I also played in bands outside of school and never looked back.”

After graduating from Cathedral Latin, Britt went to Paris, France where he studied at Conservatoire de Versailles under the tutelage of Roger Demotte, the first trumpet player for the Paris Opera.

“This is really a dream come true to have been invited to come back where it all started for me,” Britt says of performing at Cathedral Latin. “I remember performing with my band at our school dances and now as a returning as a professional. I’ll be performing in front of not only my class but all of the classes that attended Latin. Cathedral Latin will always be a very important part of my life and I’m honored to go back home to perform my new CD, Marvin Meets Miles Vol. 1.”

The centennial event takes place from noon to 4 p.m. on Saturday at the W.O. Walker Center (10524 Euclid Ave.). Later that same day, Britt performs at 8 p.m. at CODA (2247 Professor Ave.) with special guest Lauren Lanzaretta. Those tickets are $10.