A Guide to the Cleveland Museum of Art's Solstice 2015 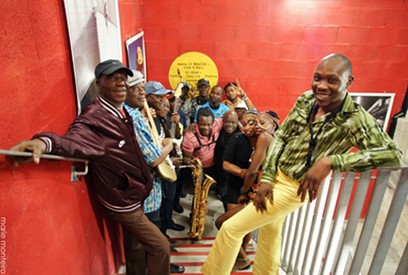 Marie Monteiro
Seun Kuti and crew.
Taking place across two stages on June 20 at the Cleveland Museum of Art, Solstice 2015 is arguably the concert event of the summer. Tickets to the event, now in its seventh year, sold out in 36 hours. In fact, only museum members were able to purchase them and the general public never even had a chance. That’s a good problem to have, and of course, you might be able to find a second hand seller giving up his or her tickets. Or perhaps you can bribe someone you know who has tickets to give you an early birthday present or something. And the museum is giving away tickets. You can enter the contest on the museum website.

We recently sat down with CMA director of performing arts Tom Welsh at Jukebox, the Ohio City bar and eatery that’s become a Hingetown hang, to discuss the lineup of what he says has “turned out to be the most exciting annual music festival in this city.” Welsh explains that one key part of this year’s festival is the video art component to several of the performances.” “The artists on the inside stage come with a video component and they have a video artist on stage with them,” he says. “That’s an interesting development in the electronic music arena where video has become central to the performance and isn’t just an old ironic movie in the background.”

He also adds that there will be “surprises,” and “some old familiar faces.” A German digital artist collective called the Constitute will bring interactive video to the outside. They were on hand a few years ago with their digital slingshot that enabled audience members to post messages onto the museum wall. Here’s Welsh’s take on the acts slated to perform.

“Psychedelic cumbia group from Colombia. We’ve had these kinds artists before at Solstice and Ohio City stages and it’s a measure of this renewed excitement for cumbia, and psychedelic cumbia, and tropicalia, and alternative versions of traditional music from the ’60s onward that these bands have emerged doing these things. Lo and behold, Meridian Brothers are touring in the U.S. for the first time since I don’t know when. What a great way to start the night.”

“This band is legitimate African royalty. Seun Kuti is the son of Fela Kuti, and he’s basically carrying on the legacy of Fela’s band. The opportunity to have Seun on this bill is too great for words so we had to do it. To hear this music by the guys who created it is a rare opportunity. moved a couple of small mountains to make this happen. It’s a great fit because one of the hallmarks of Solstice has been an international cosmopolitanism. It’s about what’s going on not just in American but on the planet earth and everywhere. Fela’s original band, now Seun’s band, symbolizes that.”

“Who doesn’t have a soft spot for a 15-piece new disco music? This is music played by people who are so young that they actually missed the disco era – they’re the children of disco, so all the difficult baggage of disco does not apply. These groups look at it as amazing source material, which it is. They bring a freshness and enthusiasm to it. It’s time for older people to admit it — they’re awesome. They played for us for the Gay Games last summer, and they’re great..”

“King Britt is playing two sets, one of which is a late-night DJ set. He’s been around for sometime. He’s an always creative electronic music and hip-hop artists. I’ve been a fan through his various projects and incarnations over the years. He knows how to throw a party. He carries his Philadelphia pride everywhere he goes, which is a great thing. He’s a total creative force.”

“I’ve always wanted King to play at Solstice. When he released the Fhloston Paradigm record, I realized this is the year we have to have King Britt with us. It’s an audio and visual project that came out on Hyperdub Records, which is this label for exquisite and abstract music. It’s head music. King’s move to Hyperdub is very interesting. It’s a forward looking electronic music label in the UK, which shows he’s a continually searching and inquisitive artist who’s not resting on his laurels or doing what’s expected. They open on the atrium stage as a trio — two electronic artists and a live video component. King is the backbone of this whole thing.”

“This is Eric Porter, who coincidentally released new music on Hyperdub. It’s abstracted free form electronic music in the post-dance world. It’s clearly influenced and informed by dance music but might be tricky to dance to. I like this idea. Inside, we’ll create this head space. There will be two different experiences inside and outside and Afrikan Sciences will be the centerpiece of the inside stage.”

“Nolan Green made several landmark recordings of sampling-based groove-heavy collages under the name The Grassy Knoll, then went off the grid for ten years — which I always thought was a small tragedy. Suddenly he was inspired to start recording and touring again, and we are really excited that he’s coming to the art museum for Solstice.”