With Hawthorne Heights, Codeseven, Firescape, and the Break. Sunday, November 28, at the Grog Shop.

Send a News Tip
Christmas With the Kranks 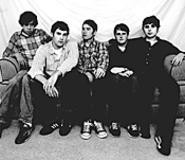 Hawthorne Heights
Hey, remember the '90s? That decade when every band that even so much as browsed the flannel racks at the local department store earned a post-Nirvana major-label deal?

Flash forward 10 years, when a similar feeding frenzy is engulfing just about any band that boasts a frontman with a set of pipes able to produce blood-curdling screams every night. Next up is A Static Lullaby, a post-hardcore quintet from Chino, California, that's finishing up its first slab of metalpunk for Columbia. Good luck, boys.

No major corporations are snapping up ASL's touring partner Hawthorne Heights just yet, but these Dayton yelpers are certainly doing well. After setting the first-week sales record for a debut on Victory Records by moving more than 4,000 units of The Silence in Black and White, the group is happy with the Chicago-based indie, says drummer Eron Bucciarelli. "Basically, they were super into us and made us feel really, really welcome. We had obviously known about Victory since we were kids and grew up listening to their bands. Just to be a part of Victory was like a dream for us. So that's why we went with them."