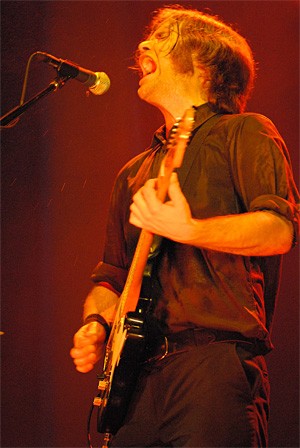 Wanda Santos-Bray
Death Cab for Cutie rocks out (relatively speaking, of course) at the PD Pavilion.

The Strange Familiar has been made an integral part of the marketing campaign for ABC Family's The Secret Life of the American Teenager, a new show from 7th Heaven's creator, starring '80s icon Molly Ringwald.

The Akron band, which is led by former Jaded Era principals Kira Leyden and Jeff Andrea, is included in a pair of commercials for the series. A 30-second version features "Courage Is . . . ," a piano-driven track from the new You Can't Go Back EP; a minute-long clip spotlights footage of the trio, mixed with scenes from the show. The last band to receive that kind of push from the network was pop-punk crew Plain White T's, with the breakout series Greek.

"Lyrically and tonally, the song couldn't have been more perfect for the show," says Stacy Asturias, creative director at ABC Family. "Plus, it's just a really beautiful song in its own right. We love to discover great new music, and so do our viewers."

"It's really great to have someone like George champion your music and get everyone else fired up about it," says Leyden. "We're really excited about it. It couldn't have come at a better time, with the launch of our new EP."

The Strange Familiar recorded You Can't Go Back in California with producer Brian Malouf — who's worked with Madonna, Michael Jackson, and Bon Jovi, and is now a vice president of A&R for Disney Records. The group found it easier — though not effortless — to get meetings after Ashlee Simpson recorded Jaded Era's "Invisible" in 2006. Band members plan to stay on the West Coast for at least six months, looking for a label deal, songwriting opportunities, and a possible radio campaign. The TV spots are airing now, and the clip is available at www.abcfamily.com. The show premieres Tuesday, July 1. The Secret Life ad generated immediate interest.

"We're getting a lot of MySpace messages, a lot of e-mails — all the good stuff," says Andrea. "I'm excited to find out what happens when it really starts spinning, because it just started."

• Cleveland metal band Forever in Terror has signed on to support Pennsylvania screamo crew Motionless in White in August, touring from Kentucky to Maine.

• Fat Fish Blue, downtown's destination for cool blues and hot Cajun food, will be opening a second outpost in Perrysburg, outside Toledo, in August. The club operated a second location in Cincinnati from 2004 to 2005.

• The Manimals canceled last week's concert after frontman Larry the Wolf suffered a sports-related injury. The band is recording three new songs this summer for an upcoming double-CD reissue of early material, to be released on Auburn Records. Visit www.myspace.com/manimals for footage of Larry at the 2008 Cleveland Kiss Expo.

• Radio legend Norm N. Nite is auctioning his collection of classic-era rock memorabilia, starting Sunday, June 22, at www.backstageauctions.com. A full catalog is available online now. Items include a copy of the book Rock On, autographed by John Lennon, Keith Richards, Roy Orbison, and more than 100 others.

• Cleveland reggae stars First Light will reunite for the first time in 10 years on Saturday, June 21, for a 7 p.m. show at the Plain Dealer Pavilion. The show will also mark the 20th anniversary of the group's landmark album Reggae Meltdown.