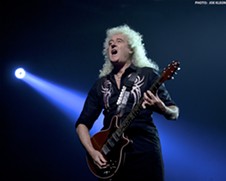 Queen + Adam Lambert made their Cleveland debut last night at a packed Quicken Loans Arena. They did not disappoint the diverse audience comprised of parents with their teenagers and long-time Queen fans. And plenty of Glamberts were there to support the former American Idol contestant too.

Seeing Queen's songs live, performed on a giant stage, underscored why the band continues to resonate with younger generations. "Fat Bottomed Girls" turned into stomping monster of a dance number, thanks to thick, roping rhythmic grooves; "Stone Cold Crazy" was an upbeat, punkish strut; and the soaring, classical-glam epic "Don't Stop Me Now" illustrated why Queen's music was adopted so easily for musical theater. "Bohemian Rhapsody" was predictably epic—not the least because guitarist Brian May made a grand entrance, rising from underneath the stage on a platform while wearing a silver cape—and drummer Roger Taylor even got into the vocal fun by singing lead on "I'm In Love With My Car," which exuded proggy, Pink Floyd vibes.

Yet Queen's meticulous attention to detail wasn't lost despite the arena's vast size. The band's trademark stacked harmonies elevated the muscular yearning of highlight "I Want It All" and the theatrical standout "Killer Queen." For "Somebody To Love," Lambert, May and Taylor performed together on a small stage at the end of a lengthy catwalk, as if they were a band jamming and woodshedding in a small rehearsal space. And the sleek synths augmenting "Radio Ga Ga" made the song feel like a thoroughly modern pop song, not a tune that's over 30 years old.

That contemporary sound was of course aided by Lambert, who more than held his own while filling the frontman role once held by the late Freddie Mercury. (Initially, he also bore a striking resemblance to George Michael, thanks to the sunglasses and vest he paired with rugged facial hair and spiky-fluffed, dyed-red hair.) He has more musical theater and Broadway in his voice than Mercury did, but he packs similar vocal power and the ability to capture different moods.

On the early rock 'n' roll homage "Crazy Little Thing Called Love," he assumed Elvis Presley-ish hip swivels and low warble. "Get Down Make Love" was a steamy seduction, and a thundering version of "Another One Bites the Dust" also had a bawdy tone, courtesy of Lambert crotch thrusts and seductive stage moves. Even more resonant was "I Want To Break Free," which was suffused with longing, and the somber and the operatic-leaning approach he took on "Who Wants To Live Forever." Lambert even slipped in a performance his new solo single, the classical-pop waltz "Two Fux," with the band; and because the song had a distinctively Queen vibe, it fit in seamlessly.

After "Killer Queen," Lambert addressed the crowd and lauded original Queen members Taylor and May by name. "You're standing in front of rock 'n' roll legends, ladies and gentlemen," he said, and pausing so they could soak up applause. Calling it an "honor" and "so surreal" to be performing with Queen, he also referenced any skeptics who may say that he's not Mercury. "No shit!" he exclaimed in a no-duh voice. "There will only be one Freddie Mercury. He is a rock God." Lambert also added that he's a "fan, except I'm up here wearing the gayest suit you've ever seen." (Cue a full-body camera pan to his bright pink suit covered in sparkly appliques.)

All joking aside, Lambert zeroed in on why he and the band work so well together: He has enormous respect for Mercury, and isn't trying to replace or replicate him—but instead pay tribute to his flamboyance, charisma and inimitable vocal talent. However, he and the band have fantastic chemistry and, like Mercury, Lambert is up for anything, prop-wise. He sang "Killer Queen" while straddling a statue of the head of the robot from the News Of The World album cover, and gamely sang while riding a bicycle toting a gigantic basket of flowers during "Bicycle Race." (May too had fun onstage, and at one point used a "stereoscopic selfie stick" to pan around the crowd and film the cheering masses.)

Queen's stage setup was also impressive, especially due to a massive, curved LED screen that rose up and down as onstage production dictated. The iconic News of the World robot factored into animation seen throughout the show: At the concert's start, the mechanized menace appeared on the screen, which was lowered at the time, and crashed through an animated brick wall to announce the band's arrival. Later, an animated version of its gnarled metal hand appeared onscreen and "lifted" May as he performed a winding, evocative and extended guitar solo while suspended high above the crowd in the air.

But while it was thrilling to see May let loose—especially since his space-prog heroics touched on "Last Horizon," a 1993 solo cut, and his frequent boyish grins revealed he was reveling in the show—Queen didn't need bells and whistles to establish its dominance. And when they did dabble in cutting-edge effects, these elements were well-placed—and used to subtly and tastefully incorporate Mercury into the show.

Brief footage of him doing "Day-O" at Wembley Stadium served as an interlude before "Radio Ga Ga." For "Bohemian Rhapsody," the band weaved live performances with parts of the studio version and clips from the song's groundbreaking video, a move that made sense especially during the elaborate, iconic bridge. In a classy touch, the performance ended with audio and video footage of Mercury playing the song at the piano, and Lambert adding the occasional line—making it seem, briefly, as if they were trading off singing.

Perhaps the most touching mention of Mercury's presence came during the night's quietest moment. May settled in at the end of the catwalk with an acoustic guitar and performed an elegiac, poignant take on "Love of My Life." During the performance, footage of Mercury singing the song appeared to his right on the projection screen, a sudden and striking moment that was quite moving. As the song concluded—and the video Mercury walked off into darkness—May had a faraway, almost wistful look on his face. It was clear that the guitarist found it emotional to be playing with Mercury again, even virtually.

But Mercury's memory and legacy were certainly in good hands last night. By the time Queen closed out the show with the encore of "We Will Rock You" and "We are the Champions," everyone in the building was united in remembering his triumphant life—and formidable talent.