The captains of industry converge on Cleveland. 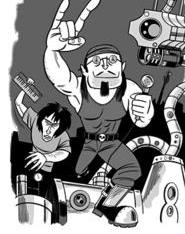 Mike Gorman
The very notion of an industrial-rock audience in 2006 smacks of those societies that put on Renaissance fairs and Civil War reenactments. Like the middle-aged fools who open their wallets every time the members of Mötley Crüe tool through town with their hands out, Cleveland has a strong contingent of pierced-and-inked rivetheads trying to relive the industrial-rock movement's late-'80s halcyon days of inspired loud guitars and synthesizer abuse.

For a scene that embraces technological advancement and (allegedly) new ways of thinking, its best music is still being made by weathered old-schoolers. Watts' new disc, Pigmata, has a swagger and urgency he hasn't plumbed in well over a decade. Ministry's latest, Rio Grande Blood, is a perfect union of guitar throttle and sampling psychosis that exists solely to further torpedo President Bush's approval rating. And despite moments of VH1-friendly mope-rock, NIN's With Teeth still teems with more sonic innovation and seething than any load of gene-pool scum Sharon Osbourne has rocking Ozzfest's main stage this year.

So, maybe electronics-based rock hasn't died, but the newbies need to stop jerking off on their powerbooks and step up.