Wake up to good music, or forever lament its passing. 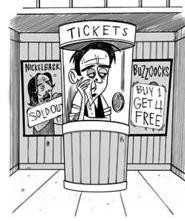 Mike Gorman
Cleveland has a history of feverishly embracing things outside the mainstream. Consider that Roxy Music's first gig in the U.S. was in our fine city. Even in the halcyon punk-alt-indie-rock action of the late '80s and '90s, there were still plenty of sold-out gigs from bands that never enjoyed mainstream radio play or spots on MTV.

There's a bigger problem in Cleveland than brain drain: I call it taste chaste. I'm talking about every one of you who helped Live sell out the House of Blues, while the Buzzcocks -- who've made a far greater contribution to rock history -- played the smaller room. I'm talking about people who support the vanilla mooing of millionaire hacks like Three Doors Down and Nickelback. How does it feel to know that your parents (or grandparents) were more open-minded than you?

Hey, all you too-cool-for-school hipsters: Sonic Youth, Flaming Lips, Death Cab for Cutie, and Secret Machines appeared on the recent Kuyahoga fest bill, and the place was nowhere near capacity. Where the fuck were you? Did you pay more money to piss off to Chicago to see the same bands at Lollapalooza that weekend? Was that "cooler" than fostering a strong music community in your own backyard?

Cleveland, we gotta open our minds and ears, and be willing to drag ourselves to work tired more often. We're smarter than the corporations selling us Creed spinoffs and wheezy reunions, and we're just as passionate about music as the undergrounds of New York, Chicago, and L.A. When gas goes to $6 a gallon and the great shows dry up because nobody supported them, you're gonna feel like a pinhead, trying to rationalize the "merits" of Maroon 5.